The left assured us that passage of  ObamaCare would lower our health care costs.  Obama promised that premiums would decerease by $2,500.00.  Anyone that has health insurance today knows that both of these statements are lies.

But, you ain’t seen nothing yet!   Projections on what to expect are shocking.

In a report compiling  data from over 30 separate studies and analyses examining the effect of ObamaCare provisions on health care premiuns in the individual and small group market, experts point to provisions such as guaranteed issue, community rating, essential health benefit requirements and new taxes and fees on insurance plans, drugs and medical devices as the driver of premium increases.

Despite the availability of $1 trillion in subsidies,  Americans across the country will still pay a higher premium in 2014 as a result of Obamacare.   In fact, households earning as little as $46,000 will receive no premium assistance, yet they will be forced to accept unaffordable premium increases as a result of Obamacare’s mandates and regulations.   Even after receiving subsidies, Americans earning as little as $25,000 will still pay more.

Obamacare’s  subsidies are estimated by the CBO  to cost over $1.2 trillion over 10 years. which is much higher than originally anticipated.   If amnesty is passed expect the CBO estimate to grow.  We will be adding millions of immigrants to the rolls, all of whom will need to be covered and almost all of which will qualify for subsidies. 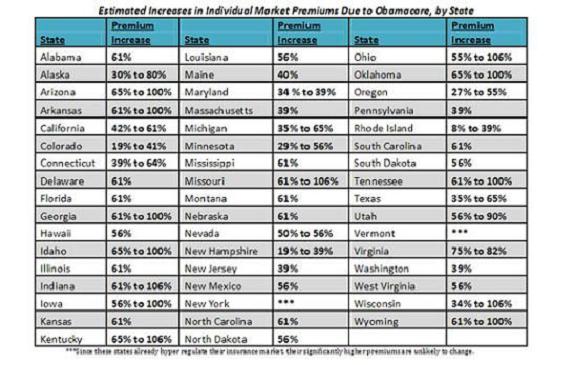 In the case of young adults, the premium spike will be even more painful.  Oliver Wyman estimates that 80% of young Americans earning over $16,000 will pay more out of pocket coverage than they pay today.   Guaranteed Issue and Community Rating mandate requiring all applicants to pay the same premiums regardless of future anticipated medical expenses, will significantly increase premiums for  most people under the age of 50.

The Essential Health Benefits requirement includes several mandates requiring individuals to purchase more expensive health insurance for coverage which includes for example, preventive and wellness services, chronic disease management, rehabilitative and habilitative srevices.  The law also requires consumers to purchase plans that cover at least 60% of medical costs with limited cost sharing.  These requirements restrict consumer choice and add to the premium cost.    A study by the Council for Affordable Health Insurnce found that in some state markets, mandated benefits will crease premiums by  as much as 50%.

Taxes and Fees on Plans, Drugs, and Medical Devices imposed by ObamaCare amounts to $165 billion in new taxes and fees on health plans, drug manufacturers and device makers.  The CBO has already said these increased taxes will be passed to consumers in the form of higher premiums.   One study  found that the law’s health insurance tax will increase premiums over the next decade.

The Department of Health and Human Services has also announced that plans sold on ObamaCare’s new federal exchanges will be assessed a 3.5% fee on sales which will also be passed to the consumer in the form of higher premiums.  According to CBO premium projections, the annual cost of this fee alone is $180 for individuals and $500 for families.

The Individual Mandate experiment at the state level creates an incentive to delay purchasing health coverage until medical attention is needed, leading to higher premiums across the board.   In 2014, the penalty for not purchasing insurance is less than $8.00 a month.  By comparison, the average cost of individual coverage in the employer sponsored insurance market is $468 a month for individuals and $1,312 per month for families.  This means that many Americans will pay the Obamacare penalty rather than buy coverage, potentially leading to an insurance death spiral and skyrocketing premiums.  In fact, reports indicate that HHS may now be considering emergency options to slow the rate shock coming in 2014.

← How Can You Charm A Nation You Don’t Believe Exists?
The Story You Haven’t Heard? →