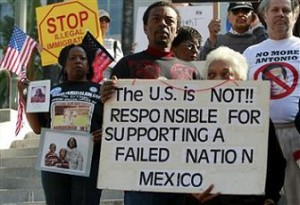 Creating a pathway to earned citizenship for the 11 million unauthorized immigrants in this country is essential. The way we treat our friends and neighbors who are undocumented – by creating a mechanism for them to earn citizenship and move out of the shadows – transcends the issue of immigration status. This is a matter of civil and human rights. It is about who we are as a nation. And it goes to the core of our treasured American principle of equal opportunity.”  Eric Holder at Mexican-American Legal Defense & Educational Fund speech on 4/14/2013

According to the Heritage Foundation:  The good news is Congress claims to care about fixing the  immigration system and broken borders.  The bad news is they want to do it with a solution that looks a lot like Obamacare—the “Gang of Eight” 844-page-plus comprehensive bill.  The sad news is that such an “easy button” solution will not improve the immigration system.  You can read the 844 page bill at this link.

Members of the Senate’s “bipartisan” Gang of Eight lied when they said that under their “new” immigration plan, those illegals currently in our country  will have to wait more than a decade before achieving citizenship. A little-noticed exception in the Gang of Eight bill provides a fast track for many illegals.  Under a special provision for immigrants who have labored at least part-time in agriculture, that fast track could mean permanent residency in the U.S., and then citizenship, in half the time.   And not just for the immigrants themselves, but for their spouses and children.

Another exception in the legislation creates a fast track for illegal aliens who came here  before they were 16 — the so-called Dreamers.  While the concept suggests youth,  the bill has no age limit for such illegals, or their spouses and children, despite claims that they must go to college or serve in the military to be eligible, there is an exception to that requirement as well.

A close analysis of the bill shows that illegal aliens will in fact not be required to pay back taxes in order to receive legal status as touted by the Gang of Eight.

If passed, this new amnesty scam would bring a minimum of 33 million  people into the country during its first decade of operation, according to an  analysis by NumbersUSA.  By 2024, the inflow would include an estimated 9.2 million illegal  immigrants, plus 2.5 million illegals who arrived as children — dubbed ‘Dreamers’ — plus roughly 3.4 million company-sponsored employees with  university degrees, said the unreleased analysis.

The majority of the inflow, or roughly 17 million people, would consist of  family members of illegals, recent immigrants and of company-sponsored workers,  according to the NumbersUSA analysis provided to The Daily Caller.

The bill is a Trojan horse for government spending, and in some cases, it appears the funding is unrestricted or ill-defined. While the full cost to implement the bill has not been released, identified spending on page 25 of the bill includes: one billion in start-up cost; 3 billion for border security; 1.5 billion for additional fencing; 2 billion for surveillance; 50 billion a year to increase prosecutions; and 50 million a year for Operation Stonegarden.

Further, the bill trashes fiscal discipline,  exploiting a loophole, [a favorite pastime of this administration] in the Budget Control Act (BCA) that allows Congress to spend more than allowed under the spending caps adopted in 2011.”  You can read Heritage Foundation “Top 5 Problems” at this link, and the Federation for American Immigration Reform’s analysis of the bill at this link.

This legislation was crafted behind closed doors in consultation with pro-amnesty groups, special interest groups, and illegal aliens.  Christopher Crane, chief ICE union representative remarked that “American citizens working as law enforcement officers within our nation’s broken immigration system” were “purposely excluded from the process.  ICE is now guided in large part by the influences of powerful special interest groups that advocate on behalf of illegal aliens. . .”

The argument that giving illegals amnesty will benefit the economy is a joke – a joke on the American taxpayer.  The massive fiscal cost will destroy what little prosperity American has left and will further undermine any chance of a recovery.

This is not about  “civil  and human rights”  or “who we are as a nation” or even the illegals.  It is a Socialist agenda to complete the economic destruction of America.

American taxpayers are not responsible for supporting a failed Mexican government.

← Aimed at your children
Robbing Your Nest Egg →