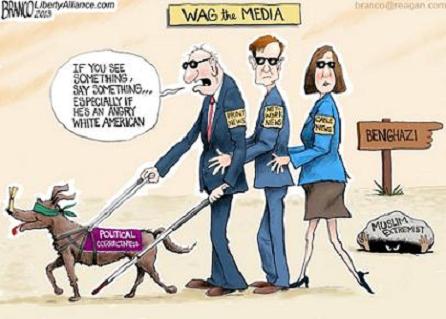 Refusing to acknowledge an enemy does not make that enemy less threatening.

Shortly following the carnage in Boston, the Obama Administration  demanded that Israel release  Palestinian terrorists, convicted in Israeli civil courts, as a goodwill gesture to Mahmoud Abbas and the Palestinian Authority.

Knesset MK Orit Struk from the Bayit Yehudi party said, “the demand is shocking, not just because the peace talks must begin without preconditions, and not just because of the danger that these terrorists will return to terrorist activity once they are released, but because the release of terrorists is an energizing shot of encouragement to terror and terrorists.  Every release like this causes potential terrorists to make the decision to become one, because they see that they will be given support. Is the America that is asking Israel to release terrorists the same America that has carried the flag in the struggle against terrorism and who recently experienced the hands of terror in their house?!”

I fully understand the Israeli response.  How would you feel if Obama demanded that both of the Boston terrorist bombers be released as a goodwill jester to Islam?  Of course that would never happen because in Obama’s world, the bombers aren’t connected to Islam, anymore than is  Nidal Malik Hasen, a Muslim Army psychiatrist  who murdered 15 people at Fort Hood –  an “incident”  that Obama labeled “work place violence,”  but a U.S. Senate report called “the worst terrorist attack on US soil since Sept. 11, 2001.”

According to the Washington Times,  some analysts are now asking if Obama’s denial of the connection between radical Islam and terrorism have  dampened law enforcement’s appetite to thoroughly investigate terrorism suspects  for fear of offending higher-ups or the American Muslim lobby.

Political Correctness is killing us: How can we properly identify the enemy,  analyze his weaknesses, and defeat him, if we are NEVER permitted to examine him  from the most basic doctrinal level?”

By refusing to see the role of radical Islam in terrorist attacks and treating them as police matters, we ignore the disease and look only at its symptoms.  This emboldens America’s enemies. Obama says that justice will be meted out, but  if this is a criminal matter, it will only be meted out to the people who  directly engage in an attack and ignore those who aid and encourage them. For  terrorists, that is an empty threat.

Failure to honestly label the threat and specifically defend against it means we run the risk of increased terrorist attacks on our soil, because we refuse to  believe that there’s any fundamental cause that links them.

“Counterterrorism is often shrouded in secrecy, as it should be, so let us judge by the results. In barely four years in office, five jihadists have reached their targets in the United States under Barack Obama: the Boston Marathon bomber, the underwear bomber, the Times Square Bomber, the Fort Hood shooter, and in my own state—the Little Rock recruiting office shooter. In the over seven years after 9/11 under George W. Bush, how many terrorists reached their target in the United States? Zero! We need to ask, ‘Why is the Obama Administration failing in its mission to stop terrorism before it reaches its targets in the United States?”   Rep. Tom Cotton