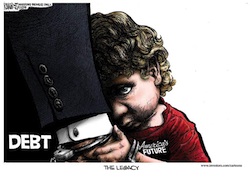 “It is the absolute right of the State to supervise the formation of public opinion; truth is the greatest enemy of the State.” Joseph Goebbels, Nazi Propaganda Minister

Benevolent totalitarianism is the concept of government control by and through deception.  It extends the life of a criminal regime and enriches the elite who might otherwise be prosecuted and sent to prison. When the ruling class or junta owns all the machinery of state including the banking/monetary system and welfare (food stamp) distribution, they can very easily arrange society so that most citizens feel warm and protected.

Fraudulent political systems and even the whole world thrive on a corrupt paper money fiat debt system. A fiat monetary system by its real name is the foundation of government fraud. The people of the world are at the mercy of organized crime led by the fountain of fiat.

Corrupt political and monetary fiat systems always self-destruct as they always spend out of control. Trust in government and its monetary system begins to give way as the facade of benevolence and democracy morphs into force, intimidation and confrontation.

The U.S. government aided by the Federal Reserve is carrying out the greatest transfer of wealth in the history of the world –  theft by devaluation.   New dollars are constantly created, and these new dollars dilute all the dollars in existence.  This is an economic war carried out in secrecy and pretense. You can read Bob Livingston’s article in full at this link.

The banks, if so inclined, then lends this new money out into the economy on a fractional basis, adding even more “thin air” dollars to the nation’s money supply.  This unique ability in America  lends the Fed enormous power – the power to create new money from nothing. With no limit.  And with that power, the Fed can control and/or influence economies and markets the world over.

Should such power exist? And if so, should a privately entity owned by the major players in the banking industry be allowed to wield that much power?

The financial markets have become dependent on new Fed dollars, and for whatever reason, the Fed has chosen to use the price of financial securities as the signaling device that its efforts are yielding results.  But the markets, like any junkie, demand greater and more frequent infusions to reach new highs.

The Fed lives in fear of re-entering recession while unemployment and wealth inequality remain stubbornly elevated. With so many families teetering at the edge, things could get ugly very quickly if a fall in asset prices were to create a “reverse wealth effect” that triggered another recessionary slowdown.

So as long as low single-digit GDP growth persists, the Fed’s hands are tied. It must continue to print. No matter that the Fed’s money tsunami is creating asset bubbles (again) in stocks, bonds, college tuition, housing, commodities, etc. – further eroding that bottom eighty percent’s ability to form capital to fund its future.

The Fed has gone “all in” here.  Prudence suggests we prepare for the worst.  The dollar may strengthen for a bit versus other currencies and perhaps the financial markets, but the long-term trend is a safer and surer bet:  Dollars will be inflated.

The government will continue to steal our wealth by continually printing more money – they have no choice – there is no Plan B.