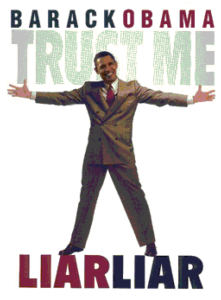 John Dickerson at Slate.com  says that the Obama administration is making the case for conservatism better than Mitt Romney or the Republican elite ever could.

Showing is always better than telling, and when the government overreaches in so many ways it gives support to the conservative argument about the inherently rapacious nature of government.

Conservatives are not the same as Republicans.  The former believe in a philosophy which stays roughly fixed and the latter belong to a party that occasionally embraces the philosophy but deviates when necessary to win elections, pass legislation, and follow the selfish aims of those who are in office and want to remain there. Conservatives argue against the expansion of government, whereas Republicans sometimes enlarge it to please their constituents or themselves.

Though some of Obama’s scandals will allow Republicans to score points in the daily tally of who is ahead and who is behind, there is a larger benefit to conservatives that goes beyond the fall in the president’s approval ratings or the boost Republican Senate candidates may get in 2014. Those outcomes rely on further adjudication of these issues.

It may turn out that President Obama had nothing to do with any of them. It could simply be rogues in various agencies. Or, maybe President Obama orchestrated the whole kaleidoscope of wrongdoing on the White House whiteboard. You don’t have to embrace either of those theories to see that it’s much easier to agree with the conservative notion that government is a mess. We have enough evidence of that already.

Whether these scandals are the result of base motives or a desire to act for the greater good, the eventual result is the destruction of individual liberties. Your IRS comes down on you because you have the wrong ideology or, in the name of protecting the citizenry, the Justice Department starts listening to your phone calls.

The confluence of these moments of government overreach may not swell the ranks of conservative clubs, but it could have an effect on policy.  As Sen. Lamar Alexander has long argued, conservatives believe not only in limited government, but limitations to sweeping acts by government.  Large comprehensive bills like the proposed immigration reform and the Obama health care plan lead to too many unintended consequences. Alexander quotes Irving Kristol, who called himself a “policy skeptic.” His skepticism is rooted in what appears to have happened at the Justice Department, IRS, and EPA:  Big sprawling government inevitably gets out of hand.