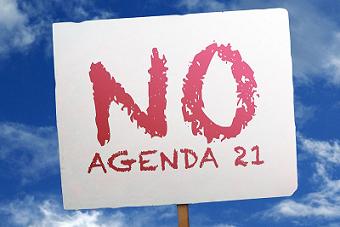 ICLEI was formed in 1990 for the purpose of promoting the UN’s vision of “sustainable development” as embodies in their document – Agenda 21.  It now counts more than 1200 cities in its membership, the vast majority of whom use your taxpayer money to pay membership dues to participate in the destruction of your property rights.

For years ICLEI has been flying under the radar — inserting their agenda into local governments while escaping the notice of taxpayers, but efforts to expose Agenda 21 appears to be paying off.  For years the “green” squad has been quietly waging an effective campaign to advance their radical agenda with the implementation of the United Nations’s Agenda 21 – Sustainable Living.

The stealth phase of their effort appears to be over.

As taxpayers get to know the truth behind “sustainable living” they have become more active in convincing local governments to say NO to ICLEI.

Delegates gathered for the International Council for Local Environmental Initiatives (ICLEI) in Bonn, Germany, are expressing their frustration over the effectiveness of free markets, property rights groups like CFACT and the Tea Party in calling attention to their activities.

By sounding the alarm at state, city and local planning meetings, in the media, via the Internet and at grassroots rallies, property rights activists are successfully hampering ICLEI’s UN Agenda 21 program, and has the “greens” concerned.

ICLEI is especially frustrated with conservative legislators, the free market, Tea Party activists, and even Glenn Beck.  Michael Schmitz, Executive Director of ICLEI USA, admitted  that while the council has been able to get “roughly 450 communities” in America to join ICLEI, they are predominantly in liberal states.  In more conservative states where the Tea Party is active, he confessed and lamented their inability to implement UN sustainable development programs.

ICLEI members from other countries have also expressed their frustration with growing opposition.  Beth McLachan, Sr. Sustainability Officer for the City of Melbourne, Australia, and former employee at the Australian EPA, said that critics of global warming policies  appear to be headed for electoral victory in her country.  The political shift away from global warming policies is why McLachan left the Australian EPA.  She admitted that if climate realists succeed on the national stage, her mission will soon be to  “carrying on the fight” at the local level.

While the tea party has been successful in getting the truth to the public, the U.N. ICLEI members will continue their fight to control the world through the destruction of property rights and our constitution, aided and abetted by the likes of Big Al “I sure make a lot of money off this lie” Gore and Obama.

The U.N. will not go quietly into the night.  If you value your right to own property, to live your life without the government looking over your shoulder, if you value America’s sovereignty, and enjoy the freedoms that our Constitution embodies – join the fight.  Learn more about the U.N. Agenda 21 and then join your local Tea Party in the fight to save our country.

“The ultimate determination in the struggle. . .will not be bombs and rockets, but a test of wills and ideals; a trial of spiritual resolve; the values we hold; the beliefs we cherish; and the ideas to which we are dedicated.”  Ronald Reagan