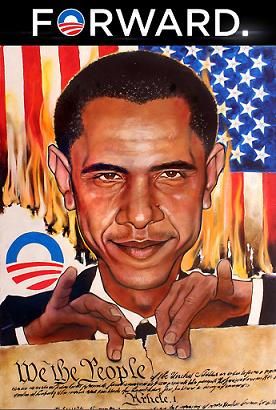 “Journalism isn’t a priestly caste or professional guild with special rights. It is an activity we all have a right to partake in. Whether it’s a blogger with a virtual tip jar exposing malfeasance or 60 Minutes making fraudulent charges about George W. Bush, there will always be good journalism and bad journalism.”  Jonathan Goldberg

First Obama and his  gang of thugs at Justice decided to mount what can only be called a sneak  attack on the press. And now,  in a pretend attempt to purge their sins, Obama  wants Congress to pass a law protecting the very press he and his gang of thugs  attacked.  Sound suspicious?

Obama has urged Sen. Chuck Schumer, D-N.Y., to reintroduce legislation for a “journalist shield law.” And in typical Washington fashion, the proposed act would do nothing to prevent the White House gang of thugs trampling on the First Amendment.

Democratic Senator Dick Durbin appeared on Fox News Sunday on May 26, to ask the proverbial question – what is the definition of “is” that Clinton never got the hang of.   Just kidding.  Actually Durbin says that the journalist shield law only raises more questions – what is a journalist today?  “We know it’s someone who works for Fox or AP, but does it include a blogger? Does it include someone who’s tweeting? Are these people journalists and entitled to constitutional protection?”

One proposed version of the law says a “covered person” (journalist)  is someone who “for financial gain or livelihood, is engaged in journalism.” In other words, a journalist is a professional. So, the government gets to decide who’s a “real” journalist. That’s a horrifying expansion in government authority.

Durbin has  swallowed hook-line-and-sinker  the left’s misguided theory that the Constitution and its Amendments protects only those they think ‘deserve’ protection.  The First Amendment  protects free speech, free assembly, freedom of worship and the right to petition the government for the redress of grievances for everyone – not just the press or the left.

In 2009, when the Free Flow of Information Act was last under consideration, Durbin and ‘I hate the first two Amendments’  Leftist Sen. Diane Feinstein of California,  pushed to have bloggers and other “second-class” journalists stripped of protections, eliciting outrage from the left and right.

It truly amazes me how deeply  the left hate our country,  the free flow of ideas and information that doesn’t involve leftist propaganda, Patriot groups, conservatives and Christians.  I do understand it however,  after all, we’ve been a thorn in their side for years and yet, the very people they hate are the only people in this country who would willingly defend their right to be soddish.

Liberal columnist Leonard Pitts captured the left’s attitude  when he proclaimed in 2010 “I do not believe in ‘citizen journalism.’ Yes, I know that’s heresy. … Yet I remain convinced that, with exceptions, citizen journalism is to journalism as pornography is to a Martin Scorsese film; while they may employ similar tools — i.e., camera, lighting — they aspire to different results.”

Pitts’ ire was aimed at figures such as James O’Keefe, who has embarrassed a lot of liberal institutions — Planned Parenthood, National Public Radio and others — with his hidden camera operations. With remarkable brevity, Pitts managed to include nearly everything that is mule-headed in this debate.  60 Minutes became a journalistic icon by using hidden cameras in stings. But when citizen journalists use the same methods, it’s akin to pornography. Why? Because the results aren’t to the left’s  liking.

Censorship is saying: ‘I’m the one who says the last sentence. Whatever you  say, the conclusion is mine.’ But the internet is like a tree that is growing.  The people will always have the last word – even if someone has a very weak,  quiet voice. Such power will collapse because of a whisper.”  Ai Weiwei