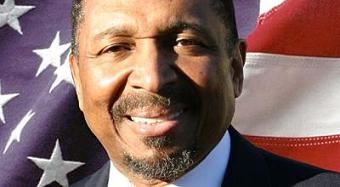 Shut the door!  An evangelical pastor is recommending people not pursue another religious belief. Now is that is shocking or what?

The far left is in full swing in their attempts to discredit  E. W. Jackson in his bid for Lt. Governor of Virginia.  They need no other reason to smear Jackson than the fact that he is a minister, a conservative, a Patriot and  a Republican, all of which rankle their ire.

This latest attempt involves a distortion of Jackson’s quote in “Ten Commandments To An Extraordinary Life” on his religious beliefs.  Jackson wrote that “When one hears the word meditation, it conjures an image of Maharishi Yoga  talking about finding a mantra and striving for nirvana. . .The purpose of such meditation is to empty oneself . . . [Satan] is happy to  invade the empty vacuum of your soul and possess it. That is why people serve  Satan without ever knowing it or deciding to . . . Beware of systems of  spirituality which tell you to empty yourself. You will end up filled with  something you probably do not want.”

The left is taking that quote and making the ridiculous assertion that Jackson is saying that  “Yoga stretching” makes you vulnerable to Satan.  While it does make a great headline – it is a deliberate distortion of Jackson’s quote.

If they are going to cherry pick quotes on Jackson’s religious beliefs to criticize Jackson; perhaps they ought to first understand some basic Christian theology.  Jackson’s statement of faith  is completely in line with Biblical thought – that people can easily be mislead by non-Christians practicing things that on the surface  seem harmless.

The concept of emptying yourself out, central to transcendental meditation, is in stark contrast to filling yourself with the Holy Spirit, which should be the goal of anyone who proclaims to be a Christian. As for the discussion of Satan, the Bible does not describes Satan as a guy in a red suit with a pitchfork.  Ezekiel 28:13-18 lets us know that Satan was once a guardian of the Mercy Seat, perfect in his ways, until pride overcome him.

Satan is also  described a great deal in the New Testament, The Apostle Paul has one of the best descriptions of  Satan in  2 Corinthians 11:14. “. . . for Satan himself masquerades as an angel of light.”    Satan, according to the scriptures, is always lurking and looking for sly and deceptive ways to mislead people. When  tempting Christ, Satan offers him wealth and power and quotes scripture out of context in his failed attempts to lead Jesus astray.

Is Jackson off the mark?  Yogi Baba Prem says that there is no Christian Yoga. “. . .  Yoga is not a Judeo/Christian word.  It is not a part of the Roman Catholic teachings and certainly not a part of Protestant teachings.  It is not found within the King James bible.  It is a Hindu word, or more correctly a Sanskrit word from the Vedic civilization.”

Dharma Yoga Asram states that “Just as Christianity denies the Hindu MahaDevas such as Siva, Vishnu, Durga and Krishna, to name a few, Hinduism and its many Yogas have nothing to do with God and Jesus, although we do respect that others believe in this way.  As Hindus who live the Yogic lifestyle, we appreciate when others understand that all of Yoga is about the Hindu religion.  Modern so-called ‘yoga’ is dishonest to Hindus and to all non-Hindus such as the Christians.”

Sannyasin Arumugaswani states that “Hinduism is the soul of yoga based as it is on Hindu Scripture and developed by Hindu sages.  Yoga opens up new and more refined states of mind, and to understand  them one needs to believe in and understand the Hindu way of looking at God. . .A Christian trying to adapt these practices will likely disrupt their own Christian beliefs.  East is east and west is west, and if Christianity is to remain Christian, the twain should never be married.”

Hinduism is one of the oldest known organized religions,  its sacred writings date as far back as 1400 to 1500 B.C.   It is also one of the most diverse and complex, having millions of gods.  It is said there is no yoga without Hindu and no Hindu without yoga. Yoga is a precise practical method of spiritual training –  In the Upanishads the term yoga signified the union of the personal soul with the soul of the universe.
The left, as usual, are out to discredit a true Patriot by slinging mud to see what sticks.  Jackson is running for Lt. Governor of Virginia – not state pastor.  I don’t see the relevance in this.  His religious beliefs are his own.
Source:  Roanoke Tea Party