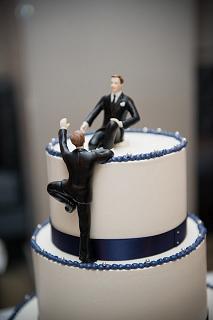 The ACLU has filed a discrimination complaint on behalf of a male gay couple against a Colorado bakery, for refusing them a wedding cake, alleging that the owners of the bakery have a history of turning away same-sex couples.

Mark Silverstein, director of the ACLU Colorado chapter says that  “someone’s personal religious beliefs don’t justify breaking the law by discriminating against others in the public sphere.”  Masterpiece Cake Shop’s attorney says that this is not about commerce – at heart, it’s about conscience.

I may make a few enemies but I have to agree with the ACLU, and that is pretty much a first.  When you operate a retail establishment you serve the public, period.   This is not about religious conscience.

Do the owners of the bakery also refuse service to unwed mothers, Jews, Buddhist,  Muslims, atheists, wiccan, agnostics,  women who have had an abortion,  or sinners in general?   I hope not – they sure wouldn’t be in business long.

As a Christian I also do not approve of nor accept the homosexual lifestyle.  I also do not agree with Obama’s granting of special rights for homosexuals.   But, as a Christian, if I  open a retail establishment catering to the general population, then I must accept that not everyone I serve will be Christian.

Christians should pray for  the homosexual the same way they would any other person in sin.  And while not approving or accepting their life style, they should treat homosexuals with the same dignity as they would anyone else.

God hates the act, not the person.  It is God’s wish that all would come to salvation.

← Not Satisfied With Just The Destruction of America. . .
Facebook Calls This “Spam” →