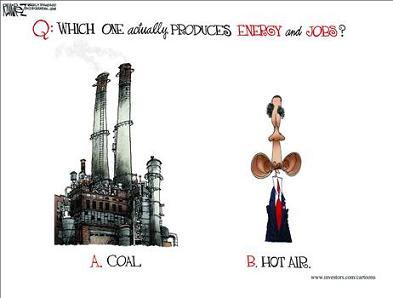 In a recent speech Obama confirmed what we’ve been saying since 2008 – he hates America and is determined to undermind any economic activity that produces jobs.  His latest assault is coal and with his new socialist at the helm of the EPA, he is more than willing to by-pass Congress  to advance his extreme agenda.

Gina McCarthy, who was confirmed to replace Lisa Jackson only last week, said the  EPA  has reached a “defining time” in its history as it prepares to regulate greenhouse gas emissions from power plants.    Translation – this may kill you but we don’t care!

Under the severe standards Obama is now proposing, many coal-fired power plants will either close their doors or face bankruptcy, putting more than 250,000 jobs at risk.  Businesses will be inundated with new expensive regulations and EVERYONE will feel Obama’s wrath in their monthly electric bills.

At the “Alice in Wonderland Senate hearing,”  under reported by the lap-dog media, “Climate Change It’s Happening Now”, the left presented a united front with Obama, calling for a carbon tax and “expensive solutions” to “save the planet.”   In the real world, not many see climate change as a pressing problem so the left has to take advantage of current weather events to reinvent themselves.  Hence, the shift to dramatic “extreme weather events” as proof of global warming.

At the hearing, “experts” (liars with a fancy title) selected by Barbara Boxer  were way over-matched by witnesses invited to question the U.N.’s favorite redistribution scam and the massive hard evidence these witnesses presented proved to anyone with common sense that the left’s theory doesn’t hold water.  As a matter of fact, Boxer and other die-hard Socialist had trouble getting their own  “experts” to agree with Obama’s lies concerning global warming.

NASA scientist Dr. Roy Spencer testified that any association with increased severe weather cannot be supported, and the left’s  oft-quoted figures that 97% of scientists support the global warming consensus is a lie.  Spencer said that what is true is that 97% of the published papers acknowledge some human influence which, he said is,”rather innocuous, since it probably includes all of the global warming ‘skeptics’ actively working in the field, who are skeptical that warming is all human caused or that if there is warming, it is not of significance to warrant immediate action given the cost of energy policies to the poor.”

Professor Roger Pielke, Jr. also testified that the left’s theory was “misleading and just plain incorrect.”  Weather related losses have not increased and have actually decreased by 25% since the 1990s.  You can read his statement at the link provided.

Of course, something as simple as the “truth” will never stop the U.N.’s assault on America’s wealth, nor will it stop the complicity of those on the left, who are determined to take us down.  While one side spreads lies about weather related events being caused by global warming, the other is working on a new “theory” to explain the lack of temperature increases in the last 15 to 16 years while concentrations of carbon dioxide in the atmosphere have continued to accelerate.

This new theory (guess) surmises that the  “slow-down” in global warming is a direct result of the oceans absorbing the “thermal warming” many hundreds of metres below the surface, which can not be monitored by satellites. Isn’t that convenient?  They can’t prove their theory but we can’t disprove it – yet!

← Executive Order Sends $500 million to Terrorists
Infanticide: The Right To Kill Babies Up To Age 3 →