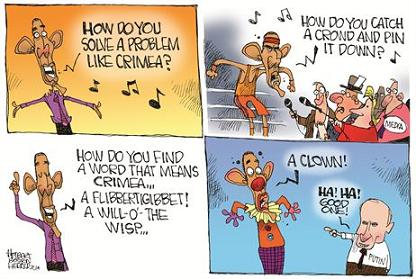 American has become a joke.  Putin’s adventure in Eastern Ukraine has consolidated his grip on Russia and made Obama to look the fool.

The head of Russia’s state-run news agency already went on air to inform Obama that “we can turn you to ash” as news of threatened sanctions caused a Russian stock surge and the ruble to grow stronger.

If the US and EU pull the trigger on economic sanctions as threated, they’ll be sitting across the table from an adversay who doesn’t seem to be worried one bit.  And with Obama’s track record in foreign policy, can you blame Putin for laughing?