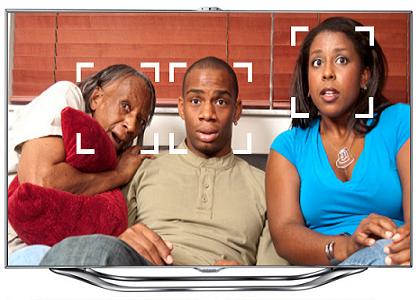 I am reposting this article from 2012 because Samsung is now warning buyers that spoken words will be captured and could well be transmitted to a third party.  So if you want your personal information to be personal, Samsung suggests you just disable voice recognition.  So, if you have to disable voice recognition to keep Samsung and its agents from spying on you in your home, why are you wasting all that money on a smart TV? What Samsung neglected to warn buyers is that if they can spy on you, so can hackers!

Business is jumping on the spy bandwagon with both feet.   What better way to spy on you than just put a microphone and camera in your family room, or better yet, in your bedroom.    The worst part is not that business would devise such a system, that is almost expected.  The lunacy is  that a lot of people will actually buy it.

Samsung’s 2012 top-of-the line plasmas and LED HDTVs offer new features never before available on a television – including a built-in, internally wired HD camera, twin microphones, face tracking and speech recognition.  They are just doing this for your convenience – everyone knows how hard it is to use a remote  and over a period of time you could end up with – a callous.

Instead, Samsung (and probably the government) want  you to purchase this new HDTV that will give you unprecedented control over the  TV,  and themselves unprecedented snooping ability.   These devices, more familiar to computer users, may allow hackers or even the manufacturer to see and hear you and your family, as well as collect personal data.

Once installed,  set up and connected to the Internet, these new models will automatically talk to the Samsung cloud.   The TV’s locate and make note of registered viewers via sophisticated “face recognition software,” just like the government intelligence agencies use.   If you tell the TV whose face belong to which users in your family, it personalizes the experience to each recognized family member.  Makes it easier for Samsung and the government to know what you watch individually.

You could also log faces of your friends or extended family.  Might as well invite your neighbors in and log their faces – why should you be the only one spied on?

The TV listens and responds to specific voice commands, but to use  that particular feature, the microphone must always be active.  Samsung does say, however,  that  you can deactivate the voice command by purchasing new software.   Of course, if you do you’ll be back to that old remote.   Unlike other TV’s which have cameras and microphones as add-on accessories connected by a single, easily removable USB cable, you can’t just unplug the sensors on this new TV and, unless the face recognition learning feature is activated, there is no indication as to whether the camera (red light) and audio mics are on.

There is no way to physically disconnect the microphone or to be sure that it is not picking up your voice when you don’t want it to, but you can manually reposition the TV camera away from you.   The LED models allow you to manually point it up and the Plasma’s camera can be re-aimed to capture objects in the rear of the TV.  But just because they can’t watch you watching TV, they can still hear you.

Samsung has not released its privacy policy clarifying what data it will collect and what data it plans on sharing with others.  They have stated that they “assume no responsibility, and shall not be liable” in the event that a product or service is not “appropriate.”    Sounds to me like they know this system can be hacked.

If after first asking yourself why you would want to put this thing in your home –  you still just have to it cause its a new toy –  you should be asking Samsung a few questions.

Never assume that a TV is unhackable.    Smartphones running Google’s Android software  have been hacked allowing outside control of phones, via third party apps, letting  cyber criminals  spy on users and steal information.    Can Samsung’s collection data  be hacked allowing  access to your name, address and images of your family?  Thieves are going to love this new system.

On top of all these “wonderful” features, the HDTVs come with an external infrared blaster that allows users to control a cable or satellite box via voice command, gesture or the Samsung remote.   Does the TV send this information to Samsung’s cloud allowing them to know what other equipment you have in your home, when you are home to use it, and what channel you watching?

With software, either the users control the program or the program controls the user.  With this new TV system, it sounds like advertisers, Samsung, burglars and the government will be controlling you.