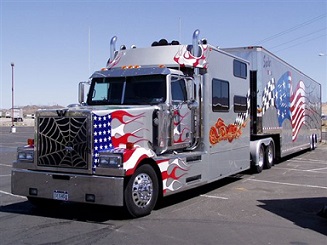 In Obama’s world – if you aren’t a left-wing do-nothing democrat, you’re expendable. The latest example is truckers.

Attached to the 2014 Cromnibus bill, an effort to keep government running at the expense of conservatives and taxpayers in general, was a bipartisan rider, the truly nauseating Kline-Miller amendment, that allowed trustees to cut pension benefits to current retirees, even if you are invested in a private pension plan.

Under the amendment, trustees would have to submit an application to the Treasury Department who would then consult with the Pension Benefit Guaranty Corporation )PBGC) and the Labor Department. If approved then the trustees would have to get at least 50% of the participants of the retirement plan to approve the application UNLESS [isn’t there always an unless?] Treasury, Labor and Pension Guaranty agree that the plan would cost the Pension Benefit Guaranty Corporation more than $1 billion if the retirement plan ever became insolvent.

The Central States Pension Fund that handles Teamsters Union drivers in Texas, Michigan, Wisconsin, Missouri, New York and Minnesota, even though they are not running out of money, petitioned the Treasury and if they have their way, more than a quarter of a million active and retired truckers will see their pension cut. Treasury is expected to announce a decision on whether it will approve the reduction within the next few weeks.    If approved, Central States retirees will see changes in their checks by July 1. Cuts will be on average 23% though exact amounts will vary based on people’s age, health status and where they worked. Some retirees will see much higher cuts.

Let’s face it, if Central gets approval, and it probably will, all the underfunded pension plans in the U.S. will be filing applications. And trust me, that is the majority of them.Central is hoping that the cut will give them a 50% chance of surviving for another 30 years. While not fair, one has to consider that part of a loaf is better than no loaf at all.

Like so many other pension plans, the Central States Pension Fund suffered heavy investment losses during the financial crisis that cut into the pool of money available to pay-out benefits. Even after the stock market recovered, improvements weren’t enough to make up for the shortfall that grew as the number of companies contributing to the plan declined and the number of people retiring and collection benefits rose.

That imbalance left the fund paying out $3.46 in pension benefits for every $1 it receives from employers, for a yearly shortfall of around $2 billion. If they don’t get approval, the fund will become insolvent by 2025. And because of the size of the plan, the Pension Benefit Guaranty Corporation would be overwhelmed.

For those that don’t known, the Pension Benefit Guaranty Corporation is an independent agency of the federal government created by the Employee Retirement Income Security Act of 1974 (ERISA) that pays benefits to employees of  “failed”  firms up to the maximum guaranteed benefit set by law for participants who retire at 65. The current maximum amount in 2016 is $60,136. The benefits payable to insured retirees who start their benefits at ages other than 65, or who elect survivor coverage, are adjusted to be equivalent in value.  In fiscal year 2015, PBGC paid $5.6 billion in benefits to participants of failed single-employer pension plans. With only around $2 billion in assets, PBGC is projected to be insolvent itself by 2025.

Out of the 10 million workers and retirees covered by multi-employer pension plans, roughly 1 million are in plans that could run out of money over the next 20 years. Three other pension plays that pay benefits to truck drivers and iron workers have also applied for cuts.

While it is unfair of companies to break their promises to retirees, it is also unfair to expect taxpayers to pick up the slack. It’s not just private pension plans that are going down the tube. Social security will be lucky to survive until 2030.  We’re in the sinking boat together!

← Propaganda Is A Science of Mind Control
Homosexual Manifesto is Just Satire! Really? →