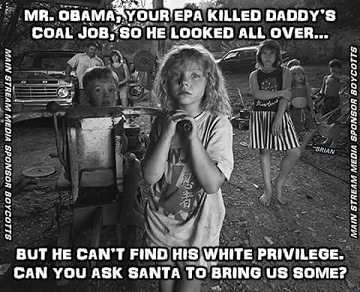 Once upon a time in America, liberals cared about working-class people. While they were misguided in many of their policy solutions, at least their hearts were in the right place. Then a strange thing happened – radical environmentalists invaded and took control of the liberal party, and government agencies that could help them in the destruction of the middle class. While the ending to this story has yet to be written, evidence suggest it will not be good.

The latest evidence came just a few days ago when another coal giant, Peabody Energy, filed for bankruptcy, suffering the same fate as Arch Coal, Alpha Natural Resources, and numerous other producers that were forced to file Chapter 11 protection from creditors, all orchestrated by Obama and his left-wing greenies. But this was what Obama promised when he said he would bankrupt coal companies with punitive regulations.   Obama’s EPA thugs, using the Clean Power Plan rules, set standards that by design were impossible to meet, rules that flouted a federal law that said all regulations must be commercially achievable, rules meant to destroy an entire industry. And, thanks to these regulations, Obama has succeeded in decimating whole towns in Wyoming, Virginia, West Virginia, Pennsylvania and Illinois, towns that were dependent on coal. His heir apparent, Hillary Clinton, plans on continuing the assault once Obama leaves town.

Not one of the left-wing greenies or Obama’s leftist ilk are the least concerned that their policies, based on fraudulent science, has killed an estimated 36,000 plus jobs since 2009 for coal miners, truckers, engineers, construction workers, etc. To the left these people are just pawns in an elitist power grab as are investors in the coal industry who have lost more than $30 billion, much of which will show up in union pension plans and 401(k)s.  And for what?

The air we breathe is cleaner now than ever. Even EPA statistics show that emissions of sulfur, lead, carbon monoxide and smog from coal plants have been reduced by 50 to 90% in the last 40 years.  Carbon dioxide, by the way, is not a pollutant – it doesn’t make you sick. Our coal is much cleaner and our environmental laws much stricter than China’s or India’s, so this shift of output and jobs from the U.S. to our rivals succeeds in making us poorer and the planet dirtier. America is the Saudi Arabia of coal, with an estimated 500 years’ supply so economically it only makes sense to destroy the coal industry if your primary goal is to destroy America.

Does the left even care that the demise of the coal industry will lead to major disruptions in America’s power supply? Just this past winter 40,000 elderly Europeans died because they could no longer afford to heat their homes with “green” energy.  Millions die every year in Africa from preventable diseases, while Obama tells them they should forego fossil fuels and rely on wind, solar and biofuel because “if every one of you has got a car and…a big house, well, the planet will boil over.”

Obama just joined world leaders in signing a new Paris Climate Treaty that will obligate the US to slash our fossil fuel use, CO2 admissions and economic growth while other countries like China, and  India are under no such requirement. In fact, while Obama was killing the coal industry in America, these countries built over 1,000 coal fired power plants and plan to build 2,300 more. They are also lining up for all that  “free” energy technology and billions of dollars from developed nations for climate change “reparations.” That is why poor countries signed the treaty –  it had nothing to do with “saving the planet,” but a lot to do with lining the pockets of some third world dictators.

And trust me, the coal industry is only the first to go. Environmentalism has morphed into an anti-hydrocarbons climate movement that claims every weather event and climate blip is unprecedented, a harbinger of Armageddon, and naturally caused by the developed worlds’ use of oil and gas.   Bernie the socialist  senator has already introduced legislation to keep America’s abundant fossil fuels locked up in perpetuity. Big Hillary opposes all fossil fuel energy extraction from federal lands, plans to block fracking by imposing countless more regulatory obstacles and intends to force us 50% dependent on renewable energy by 2030. As president, either of them would be more than willing to follow in Obama’s footsteps and use executive orders to achieve these goals.

The consequences will be disastrous. Enormous acreage, water, fertilizer, pesticides and fuel will be devoted to producing biofuel, not food, while millions more birds and bats will be butchered by wind turbines. Millions of jobs will be lost and millions more sent into fuel poverty.

40,000 elderly Europeans lost to lack of heat will be a drop in the bucket to what we will face if we don’t wake up.  Of course, to the left, these deaths will be an added bonus. After all, the world is overpopulated and could lose at least 6 Billion or so, right?

Source: Dig a Hole for US Coal by Stephen Moore; and Coal Industry on the Rocks by Paul Driessen