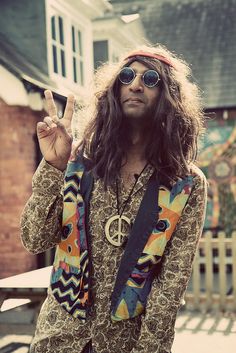 Today’s world has fallen victim to the peace-loving, pot-smoking, bra-burning, long-haired hippie freaks of the late sixties and early seventies.

Underpinning the entire hippie movement was the wholesale rejection of what they perceived as  “repressive,” unthinking, middle class morality, a situation they hoped to resolve  by freeing people of color, ending racism and poverty,  stopping wars,  and liberating women from the “forced” sexual slavery of the obsolete institution of marriage. These were the drugged out masses of unwashed rebels without a clue.

Forty-five years later these people have instituted a successful organized massacre in higher education, eliminating most of the conservative faculty and driving the rest underground. They run amok, instituting freethinking progressive reforms at every level of the system. In it for the long-haul and dedicated to the enduring grind of teaching two classes a week, cocaine-fueled orgies, and the ceaseless parsing of curriculum into unrecognizable snippets such as Post-Woodstock Transgender Inuit Long form Cinema Studies, before you could say “Don’t Bogart That Joint,” the hippie freaks had transformed our universities and colleges into the most rigid, closed-minded, repressive, unthinking, tight-sphinctered, narcissistic institutions on earth.

But it gets worse. J. C. Bourque writes that these enlightened former freaks who now inhabit our campuses have become increasingly hypersensitive and nasty, spitting tacks at people for all manner of imaginary crimes such as “culture appropriation.”

Once in charge, these rebels without a clue instituted new codes of conduct on our educational system  to ensure everyone was comfortable at all times leading to today’s outraged, privileged, fragile snowflakes conjuring up utterly trivial nonsense to consider as an affront.  Microaggression, a new imaginary crime can include using the wrong one of more than 50 gender pronouns, sideways glances, snort-chuckling, eye rolling, resigned sighing, and even merely existing in proximity to a person with raw sensitivity. Shouldn’t behavior actually be required to attain a certain level of intensity to earn the term “aggression?” What’s next nonaggression? Will kindness be re-categorized as “negative aggression” and become another form of effrontery?

At Emory University, some fascist from outside the perimeter jumped the razor wire and wrote “Trump 2016” on the sidewalk in chalk, a situation that could easily have been remediated with a bucket of water. Instead, the student government allocated emergency funding for counseling sessions and the college administration issued the usual limp apologies and assurances. Students were “afraid” to attend classes because they might sit near someone with a “different worldview.”

And in order to protect these fragile idiots, books containing troublesome material are now slapped with “trigger warnings,” whilst universities and student unions are declared “safe spaces” where snowflakes should not have to encounter anything they disagree with. Literary classics are now considered potentially “unsafe” to read. Reading lists at some universities are being adapted to come with warnings printed beside certain titles. Take for example, The Great Gatsby by F. Scott Fitzgerald which comes with trigger warnings of suicide, domestic abuse and graphic violence. In some colleges, professors have been known to tell students that if a book makes them feel unsafe, they are allowed to skim it, or skip it altogether.  So much for a rounded education!

Political correctness is often taken to absolutely ridiculous extremes in an attempt to keep these flakes from being exposed to anything that could remotely be considered offensive. For instance, consider a couple of examples from the UK. The University of East Anglia outlawed sombreros in a Mexican restaurant and caused the National Union of Students to ban clapping as “it might trigger trauma,” asking them to use “jazz hands” instead.

What we’ve learned from this process, is when aggrieved people, even peace-loving flower children, acquire power, they invariably turn into oppressors as horrible as, or worse than, the tyrants they replaced. This is now we have come to witness the spectacle of a white guy with dreadlocks being assaulted by a black woman wearing Bob Marley flip-flops, neither of whom is a Rastafarian or Jamaican.  God Save Us!