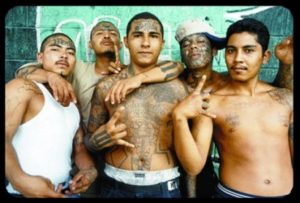 According to the FBI, the U.S. is now home to almost 35,000 violent street gangs, with a presence in all 50 states. There are an estimated 1,350 gangs in Los Angeles alone and there are at least two gangs in Springfield, Tennessee, where the total population is less than 17,000.   There are a total of 1.4 million criminally active gang members across the country, or three gang members to every two law enforcement officers. The number of violent gang members is 40% higher today than in 2009, and 25 times higher than in 1975, and the figures keep growing each year.

According to James Howell of the National Gang Center, “in the past five years, we’ve seen an 8% increase in the number of gangs, an 11% increase in members, and a 23% increase in gang related homicides.” Though gang members make up less than half a percent of the U.S. population, they commit 16% of the total homicides and 25% of the homicides in cities of 100,000 or more.  Most victims are themselves gang members, but many are bystanders caught in the crossfire.

Murders are only part of the problem. In a report to Congress, the FBI said that “gangs are morphing, multiplying, migrating and entrenching themselves in our inner cities, suburbs, and rural communities. They are selling drugs to our kids, shooting up neighborhoods, invading homes, robbing our banks and stores, stealing our identities, our money and instilling fear and violence everywhere they go.” In many communities, they are responsible for a staggering 80% of the total crime rate that includes not only drug dealing but prostitution, human trafficking, weapon trafficking, identity theft, and fraud.

Part of the “multiplying and morphing” in recent years is caused by traditional large gangs splintering  into several smaller ones.   As an example, Chicago was for decades controlled by just a handful of large powerful gangs. But in 1997, the leadership of the largest and most powerful, the Gangster Disciples, was arrested. Almost immediately, infighting and territorial battles erupted among the remaining members, getting more intense with each passing year. Now Chicago has more than 600 gangs, battling for control over a few city blocks, spawning the violence that gives the city the nickname Chiraq.

This is not just an inner-city problem.  Gangs are expanding operations to the suburbs and rural areas  to capitalize on new drug operations which brings new levels of violent crime.  During 2007, law enforcement officials in Irvington, New Jersey, a suburb of Newark, reported 23 homicides, 20 of which were believed to be gang-related. In 2008 six homicides were reported in Irvington, three of which were believed to be gang-related. Members of national-level gangs such as Bloods, Ñeta, Mara Salvatrucha, and Latin Kings have been linked to a number of these homicides.

A notorious gang typically associated with El Salvador actually got its start in the United States. MS-13, aka the Mara Salvatrucha, started in Los Angeles, wove its way to Virginia and eventually made it to El Salvador.  While the group of more than 10,000 gang members is more violent in El Salvador, focusing on murder and human trafficking,  in Northern Virginia, its members are apt to steal or traffic drugs.  According to federal authorities,

Obama’s open border agenda has resulted in a surge of some 227,000 plus unaccompanied children that could well be swelling the ranks of America’s most dangerous gangs. While they must remain in federal custody until a sponsor can be located,  they usually end up being sponsored in communities that are ripe for recruitment by Latin gangs.  Areas that have seen an influx in MS-13 crime are Maryland, Texas, and Virginia, especially Fairfax County, Va. which as seen a 160%  increase in MS-13 related incidents.

Why are so many of America’s youth caught up in this violence?  Some join gangs to find the family, the sense of commitment they never knew. Others join because the lifestyle is glamorized in hip-hop, in gangster rap that promotes drug dealing, drug use, rape, and violence toward police. A study led by Dr. Brian Primack from the University of Pittsburgh’s Department of Medicine found that of the 63 hip-hop songs that made it onto Bill board’s most popular hits in 2005, a staggering 77% discussed substance abuse, often in the context of wealth and sex.  A analysis published in the Journal of Criminal Justice and Popular Culture in 2001 found that 22% of all hip-hop songs contained depictions of assault, rape and murder. If you expand this to include all forms of violence, the figure jumps to 60% and in some subgenres, it is as high as 71%.

In the last two decades, the most successful hip-hop stars have made hundreds of millions extolling sexual assault, rape, drug culture, gun violence and subversion. In her book “The Hip Hop Wars, ” Brown University professor of African Studies, Tricia Rose, writes that hip hop perpetuates violence. “The depths of the commercial success associated with violent….hip hop has given violent black masculinity a seal of approval, thus encouraging these behaviors among kids most at risk and who “need” to embrace this model of manhood is to survive….We constantly make violence sexy….and expect them not to valorize violent action.”

So one must ask why does Obama and his ilk endorse the music of hip hop artists who glorify thug life when gang violence brings nothing but suffering and death to hundreds of times more people than police misconduct does? Is there an agenda we know nothing about?

Just this summer the Chicago Tribune wrote that part of the reason for the rising rates of gang violence in Chicago was due to accusations of police unjustly killing black people which puts police officers “under the harshest light,” leaving them to feel that “no one has their back.” When law enforcement feels that no one has their back they are “reluctant to do their job, to take a chance of going to prison for doing anything that could be perceived as racists.” And what happens when the police stand down? Criminals Run Amok.

Gang violence in the United States is a huge problem. Violent gangs with internecine and brutal networks are responsible for thousands of deaths of both innocent by-standers  and  gang members every year. It’s no longer a problem that local law enforcement agencies can handle – it’s much bigger than that and the Feds have known this for years.
If these gangs are not brought under control, the streets of America, the lawlessness of gang culture, will become ever more prevalent and will contribute to widespread societal breakdown.