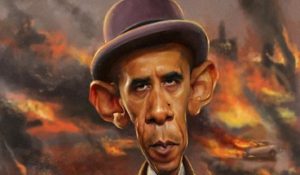 It has become apparent that as his reign ends our current commander-in-chief has opted to grade his rule on a curve.  I refuse to insult your intelligence by repeating his verbal pats on the back.  I will say  however, that voters did not elect Trump because they thought Obama’s reign was a success.

After eight years of all the turmoil it would be almost impossible to find too many Americans who are not aware of Obama’s past as a community organizer pushing the socialist and Marxist agenda of Saul Alinsky who believed that revolution was a slow, patient process attained through penetration of existing churches, unions and political parties to gain influence within the decision making ranks, or to deny his use of Alinsky’s rules during his time in office.

Obama actually taught workshops on the Alinsky method for several years and in 1990 wrote an essay  which was reprinted as a chapter in a book titled “After Alinsky: Community Organizing in Illinois.”  During the 2008 presidential campaign, Saul Alinsky’s son David wrote that “Obama learned his lesson well. I am proud to see that my father’s model for organizing is being applied successfully beyond local community organizing to affect the democratic campaign in 2008. It is a fine tribute to Saul Alinsky as we his approach 100th birthday.”

With just a few days left until he must hand over the reins of government to Trump, Obama promises, or threatens depending on your view, that he will be a thorn in the side of our new government.  Or as Dawn Parabellum in an article at Mad World News remarked, “Oh, goody, we aren’t losing a president, but gaining a useless community organizer.”

Melanie Phillips in an article for the British Sunday Times also pointed out that Obama was poised to return to his Marxist roots and become the cheerleader for any and all opposition to the Trump presidency. “Just vague aspirational waffle? Unlikely! For in his previous life, Obama was a community organizer.” According to Alinsky these organizers should “rub raw the resentment of the people” and “agitate to the point of conflict” while pretending to be middle-class folk in suits.”

As Phillips pointed out, the “effect of such a climate of agitation extends much further than the Democratic Party. We’ve already seen it in the violent anti-Trump demonstrations and harassment of Republican voters; and in the riots pushed by Black Lives Matter with a call for “dead cops” and the “lynching of white people.“  And, unless something is done to heal the deep ideological differences in America, the protests and riots currently engulfing America’s cities will only escalate as professional agitators like Obama fan tensions.

During the 2016 campaign, Bishop E.W. Jackson was quoted as saying that because Obama supported every left wing racial demagogue who reared his head, we needed a president who would heal the divide.    Can Donald Trump do that?”  Maybe, maybe not.   It is best not to put your trust in a so-called political savior.  Only Christ is the Savior – everyone else serves, for better or for worse.

We have lived through 8 years of political demagoguery and executive orders, and we surely do not need more of the same. Whether you did your best to advocate for the candidate that you felt was best suited to lead out nation or whether you voted for the candidate who was not Hillary is moot at this point.  The election is over – Trump won. It is time to go forward.

Daniel 4:17 tells us “…that the most High ruleth in the kingdom of men, and giveth it to whomsoever he will…”

God is ultimately in control directing affairs to serve His purpose. At this most dangerous time in our history, I feel certain that He nudged and steered events in America just enough to bring Trump to power. But whether this was to actually make America “great again,” or to chastise us for ignoring Him, defying Him, and openly blaspheming Him remains to be seen.