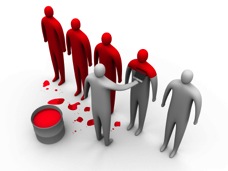 In 2016 Obama decided that people who have worked and saved for the home of their choice, in the neighborhood of their choice were racist. It is, after all, unfair to deny access to housing to people who can’t afford it because, as Obama has explained to us in the past, we are not responsible for what we have – the government is.

If anyone was really dumb enough to believe Obama’s leftist action was about fairness or racial equality, you seriously need your head checked. This is just the first step toward fulfilling the United Nation’s Agenda 21 program; a means to tell you where you can live, what you can drive, what you eat, where you work or were you are allowed to shop; the first step toward your enslavement to the World Government.

Using the federal Housing and Urban Development Agency (HUD) as his instrument of destruction, Obama’s insult to the rule of law, the Affirmatively Furthering Fair Housing (AFFH) is nothing more than redistribution in the name of social justice, or as the left prefers to call it – sticking it to whitey.

Under these new regulations, HUD is forcing every community that applies for its grants to complete an “Assessment of Fair Housing” to identify all “contributing factors” of discrimination, factors such as race, income level, religion and national origin, of everyone living within that community. This information will be used by some left-wing unelected bureaucrat to determine whether your community is “fair and balanced.”

If HUD determines there are just too many rich white folks living there every special interest left-wing group within ear shot will descend on your planning commission to “help design a plan which the community will be required to implement before receiving grant money. Once the money is accepted and the city or county has tied themselves to this “plan” nothing local voters can do or say will ever be able to change it. And just in case your local officials decide to ignore HUD’s “suggestions,” there is always those liberal federal judges to make it happen.

In response Senator Mike Lee introduced S 103, the Local Zoning Decisions Protection Act of 2017, on January 11, 2017, to stop HUD from implementing this social justice regulation. Cosponsored by Senators Tom Cotton of AR, David Vitter of LA, Mike Enzi of WY, Jeff Sessions of AL and Marco Rubio of FL, the bill was read twice and referred to the Committee on Banking, Housing, and Urban Affairs, where the left hopes it will never see the light of day.

Senator Lee’s bill would put a stop to Obama’s backdoor implementation of the U.N.’s Agenda 21, nullifying its effect by denying federal funds to ‘design, build, maintain, utilize or provide access to a Federal database of geospatial information on community affordable housing.

This is not a black or white, rich or poor issue. “Every American should be free to choose where they live, and every community should be free to zone its neighborhoods and compete for new residents according to its distinct vales. The diversity of America’s neighborhoods – from dense cities to wide-open rural communities to suburbs in between – is a treasure that we need to preserve. We don’t need a National Zoning Board. Washington should let Americans ‘govern local.’” Senator Lee also added that “a better debate would be about how Americans could better spend the money that is wasted every year by the dysfunctional Community Development Block Grant Program.”

Representative Paul Gosar of Arizona plans on leading the fight in the house.

Let’s get this bill passed and on President Trump’s desk. Call your Senators and Representatives. Demand that they support property rights, and the right of people to live where they choose, not where the government and the United Nations thinks you should live.

← Berkeley Protest? No it was a Berkeley Riot
Soros Says “He Will Take Down President Trump” →