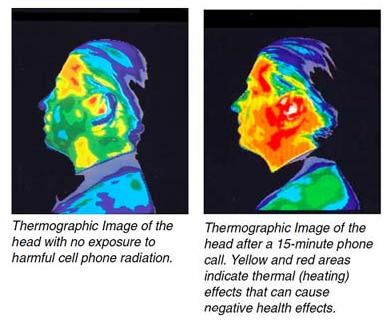 A once-secret document detailing links between cell phones and brain cancer has been released by order of a California court.  Entitled, “Cell Phones and Health,” the document was demanded in a lawsuit filed by Joel Moskowitz, Ph.D., director of the Center for Family and Community Health at UC Berkeley’s School of Public Health.

Cell phones, like other electronic devices, emit a kind of energy called radiofrequency EMFs (electromagnetic fields). Health officials are concerned about possible health effects from cell phone EMFs because some recent studies suggest that long-term cell phone use may increase the risk of brain cancer and other health problems. For those concerned about possible health problems, this fact sheet provides information about how to lower exposure to EMFs from cell phones.

Several studies have found that people with certain kinds of brain cancer were more likely to have used cell phones for 10 years or more. Most of the cancers were on the same side of the head that people usually held their phones. Although the chance of developing brain cancer is very small, these studies suggest that regular cell phone use increases the risk of developing some kinds of brain cancer. Some studies have also linked exposure to EMFs from cell phones to fertility problems.

EMFs are types of radiation. They are created by all electronic devices. Some devices, such as watches, create weak EMFs that are considered harmless. Others, like X-ray machines, generate very strong EMFs that can damage cells and tissues, and cause cancer and other health effects. This is why we try to only use X-rays when necessary. Cell phones make relatively weak EMFs, somewhat less than those from microwave ovens, but because they are used frequently and kept close to the head and body, cell phone EMFs can affect nearby cells and tissues.

Your exposure to cell phone EMFs depends mostly on your distance from the phone, the strength of the EMF, and how long and how often you use the phone. The farther away the phone is from your body, the lower the exposure. Your cell phone produces stronger EMFs at the start of a call, when it is trying to connect to a cell tower, and also when only one or two bars are showing. Your phone also emits stronger EMFs when used in a moving car, bus, or train, as the phone switches connections from one cell tower to another. Finally, some phones produce stronger EMFs than others.

EMFs can pass deeper into a child’s brain than an adult’s. Also, the brain is still developing through the teen years, which may make children and teens more sensitive to EMF exposures. For these reasons, parents may want to limit their child’s cell phone use to texting, important calls, and emergencies.

It is hard to talk about the dangers of cell-phone radiation without sounding like a conspiracy theorist, especially in the U.S. where non-industry-funded studies are rare, where legislation protecting the wireless industry from legal challenges has long been in place, and where our lives have been so thoroughly integrated with wireless technology that to suggest it might be a problem—maybe, eventually, a very big public-health problem—is like saying our shoes might be killing us, except our shoes don’t send microwaves directly into our brains. And cell phones do—a fact that has increasingly alarmed the rest of the world.

Consider, for instance, the following headlines that have appeared in highly reputable international newspapers and journals over the past few years. From summer 2006, in the Hamburg Morgenpost: Are We Telephoning Ourselves to Death?  Another article in the Danish journal Dagens Medicin: Mobile Phones Affect the Brain’s Metabolism. December 2007, from Agence France-Presse: Israeli Study says Regular Mobile Use Increases Tumour Risk. January 2008, in London’s Independent: Mobile Phone Radiation Wrecks Your Sleep. September 2008, in Australia’s The Age: Scientists Warn of Mobile Phone Cancer Risk.

GQ writer, Christopher Ketcham, writes that the scientific debate is far from resolved, even with all the multiple reports, mostly out of Europe’s premier research institutions,  of cell-phone and PDA use being linked to “brain aging,” brain damage, early-onset Alz­heimer’s, senility, DNA damage, and even sperm die-offs (many men, after all, keep their cell phones in their pants pockets or attached at the hip). In September 2007, the European Union’s environmental watchdog, the European Environment Agency, warned that cell-phone technology “could lead to a health crisis similar to those caused by asbestos, smoking, and lead in petrol.”

Perhaps most worrisome, though, are the preliminary results of the multinational Interphone study sponsored by the International Agency for Research on Cancer, in Lyon, France. (Scientists from thirteen countries took part in the study, the United States conspicuously not among them.) Interphone researchers reported in 2008 that after a decade of cell-phone use, the chance of getting a brain tumor—specifically on the side of the head where you use the phone—goes up as much as 40% for adults. Interphone researchers in Israel have found that cell phones can cause tumors of the parotid gland (the salivary gland in the cheek), and an independent study in Sweden last year concluded that people who started using a cell phone before the age of 20 were five times as likely to develop a brain tumor. Another Interphone study reported a nearly 300%  increased risk of acoustic neuroma, a tumor of the acoustic nerve.

← Leonardo DiCaprio is a Complete Idiot
The Truth About Popular Culture →