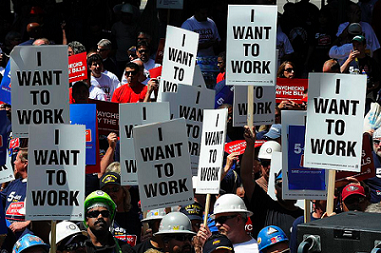 In February of this year, Republican Senators Tom Cotton of Arkansas and David A. Perdue Jr of Georgia introduced S 354, the Reforming American Immigration for Strong Employment Act (RAISE).  Senator Perdue stated that while the bill was not an attempt to solve all immigration problems it would help American workers by reducing the number of lifetime work permits given to foreign citizens and end Chain Migration.  The bill will take steps to reduce legal immigration over a period of several years to levels that are in live with historic norms which is not only good for our national interest but for the wages of American workers.

The bill will permanently eliminate the Diversity Immigrant Visa program, aka the Green Card Lottery, established by the Immigration Act of 1990. Administered by the Department of State, the lottery issues 50,000 permanent resident visas annually by selecting applicants from countries with low rates of immigration in the five years prior. It will also set a 50,000 per year limit on permanent residency refugees, the cap recommended in the 1980 Refugee Act, which is current law but ignored by past presidents.

Hesham Mohamed Hadayet, the terrorist who attacked El Al airlines ticket counter at Los Angeles International Airport in 2002 gained entry into the US from the Green Card Lottery.  Mohamed Atta, one of the 9/ll terrorists had applied twice for this lottery before getting into the US on a different Visa to study aviation. No one knows for certain how many terrorists have infiltrated the country through this program but, according to a  2007 GAO report  over 9,000 people from countries that sponsor terrorists had applied for and gained entry through the diversity lottery.

Chain Migration allows each legal permanent resident (Green Card Holder) or immigrants who becomes a citizen  to petition for adult brothers, sisters, sons, daughters and parents to be allowed to migrate to the U.S. As these new immigrants receive their Green Cards they are also allowed to petition for their spouses, brothers, sisters, children, parents, etc. to migrate to the U.S., who in turn do the same. It is an immigration merry-go-round that never stops.

According to a VISA bulletin prepared by the Department of State, Green Cards are still being issued to Philippino born adult brothers, sisters and minor children of citizens who first filed their green card applications in the early 1990s. Because the wait time for these new immigrants to obtain a Green Card is so long, many are choosing to come to the US illegally while waiting for those green cards.  This program has become the primary mechanism that has caused immigration to quadruple from about 250,000 a year in the 1950s and 60s, to more than one million annually since 1990.

Cotton’s bill would allow new citizens or Green Card holders to petition for the migration of their spouse and minor children only and would create a temporary Visa for parents in need of caretaking that requires guaranteed support and health insurance by the sponsoring children. The parents would be prohibited from working in the U.S. or accessing public benefits.

During a White House press conference on March 8, Spicer stated that Trump had met with Senators Cotton and Perdue and was supportive of the RAISE Act. He said that Trump also supports moving to a merit based immigration system that would help protect American workers.  Trump is quoted as saying:  “Switching away from this current system of lower-skilled immigration, and instead adopting a merit-based system, will have many benefits: it will save countless dollars, raise workers’ wages, and help struggling families — including immigrant families — enter the middle class…”

Please contact your Senators to ask that they support this bill. It was read and sent to the Committee on the Judiciary on February 13. The ten Republicans on the Committee are Chairman Chuck Grassley of IA, Orrin Hatch of UT, Lindsay Graham of SC, John Cornyn of TX, Mike Lee of UT, Ted Cruz of TX, Ben Sasse of NE, Jeff Flake of AZ, Thom Tillis of NC and John Kennedy of LA.

You’ve heard that old adage – the squeaky wheel gets the grease – get squeaking. It is time to show our government that we are fed up.  We want real reform – not platitudes.  S 354 is only the first step –  next Congress must address the abuses in the H-1B Visa program.

“Putting people first has always been America’s secret weapon. It’s the way we’ve kept the spirit of our revolutions alive — a spirit that drives us to dream and dare, and take great risks for a greater good.”  Ronald Reagan