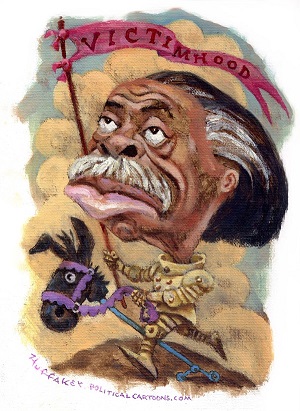 The Greeks gave us the idea that life is never fair – choices are sometimes only between the bad and the far worse, so says Victor Davis Hanson, writer, historian and former classics professor. In contrast modern Americans gave the world therapy – life must always be fair and if not, someone or something must be blamed – all people deserve a good life or else!

The left has created what Hanson calls the golden age of victimhood, where every culture, other than America, is conceptualized as the victim of American colonialism, imperialism, and capitalism. They have even attempted to repackage our Islamofascist enemy to be the poor, helpless victim of America. Anyone challenging this concept is automatically labeled racists, sexist, homophobic, Islamophobic, and any other number or form of derogatory terms they can dream up.

In this age of victimhood, we not only lose our identities but as part of an offended collective, we can now claim blanket exemption for all our imperfections. We are no longer responsible for anything we do or say because as victims we are always morally right, even when we’re wrong, and we’re not accountable to anyone for anything.  We are perpetually a victim, forever entitled to sympathy, justified in feeling moral indignation.  But what happens when we all become victims?  Who is left to be the victimizer?  Can victims victimize?   Can gays be Islamophobic, Muslims homophobic, blacks racists, women sexist or Latinos xenophobic?  If they can, who is left to sort out their relative rock/paper/scissors zero-sum grievances?

In The Golden Age of Victimhood, Dr. Sanity writes that the left, having given up any objective standard by which to mediate different perspectives and feelings, having abandoned reason altogether in favor of expressing one’s feelings no matter what the cost; and, having endlessly touted the critical importance and essential need to belong to one’s race, tribe, religion or group first and foremost; the outcome is what Stephen Hicks refers to as “group balkanization,” with all its inevitable and inescapable conflict.

In short, the left has done everything within its power to eradicate the melting pot that made America great while glorifying  cultural differences and victimhood no matter how insane or irrational that agenda might be to the nation, its sovereignty, its freedoms, and its people.  Does it really matter?  Of course it does, victimhood makes it harder for us to resolve political and social conflicts.  It feeds a mentality that restricts free expression by claiming the right to say who is and who is not allowed to talk.  It crowds out give and take, the very concept of a good-faith disagreement, turning every policy difference into a pitched battle between good (us) and evil (them).

Hierarchy, inequality, and violence have always been part of the human social structures. There were and will always be rulers and the ruled, leaders and followers, the fortunate and the needy, the powerful and the weak. Various cultures treat disparities in status, power, fortune and ability in different ways. Buddhists emphasize the aspect of karma and destiny, while in the modern West the focus has been on freedom and choice, an individual’s control over his or her own destiny. Unfortunately, in today’s modern society, inequalities and differences are more often associated with injustice and victimization.

Where we once celebrated individuality, where each of us were encouraged to pursue our own life, liberty and happiness, our children have been indoctrinated with the idea that diversity is more important than competence; that allegiance to one’s ethnic identity is more important than allegiance to American values; and that achieving victimhood confers ultimate moral authority. Taking responsibility for one’s life, becoming successful, and doing well is now the hallmark of the race or gender traitor, who has willfully joined the ranks of the oppressors.

Armstrong Williams in Victimhood Encourages Gov’t Dependence, defines the left’s insistence on a victim mentality as nothing short of a direct attack on the dignity of the human person; the cousin of the sin of despair which the Bible calls “sickness unto death.”   Driven by leftist dogma with an intense narcissistic need to become champions of the oppressed, the left must constantly find and maintain an oppressed class of people to champion and in doing so they have willingly embraced the Marxist dialectic that the world is divided into two groups – the oppressors – i.e. white, male, heterosexual, Republican, Conservative, Christian, American, Israelis and the oppressed – everyone else.
But when victimhood becomes the measure and the end of justice, and when more and more people step up to claim it because it offers both a short-cut to credibility and the chance to wallow, child-like, in the comfortable helplessness provided by misguided public empathy, declarations of suffering become little more than dysfunctional and pitiful whining.

To explain away one’s failures and frailties as the effects of some outside force; to float away on a sea of comfortable social empathy; and to embrace a right to irresponsibility is a bit like regressing to childhood according to Thomas Wells in The Philosopher’s Beard.

“Victim mentality only creates helplessness, the most maddening, miserable and upsetting of mental states…. It is a cousin of paranoia, a sense that the world is out to get you, that there is some opposition, some rivalry between you and the world. This is a warped, twisted mentality that offers no benefits, and, more importantly, is manifestly false.” Armstrong Williams