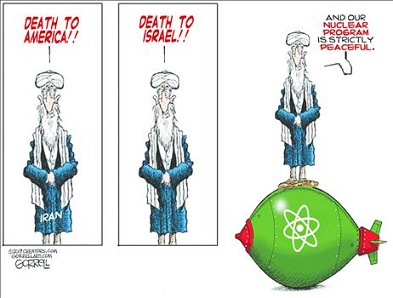 In December 2016, the leaders of Iran’s Revolutionary Guards threatened to intervene in Bahrain and Yemen. Bolstered by Syria’s victory in Aleppo, with the assistance of sectarian militia of Iraq, Afghanistan, Pakistan, Hezbollah and Russia, Iranian Brigadier General Ramadan Shariff also revealed Iran’s intentions of expanding geographically though the use of war and military invention in the Arab world.

Bahrain, located off the coastline of Saudi Arabia in the Persian Gulf, is home to the U.S. Navy’s 5th Fleet and in close proximity to the Arabian key oil fields. While the state religion is Muslim, due to an influx of immigrants and guest workers from non-Muslim countries like India, the Philippines and Sri Lanka, the overall percentage of Muslims has declined to 79% according to a 2010 census. Bahrain is predominately Shiite, but ruled by the Sunni al-Khalifa monarchy of Saudi Arabia. Saudi Arabia has a large Sunni majority, but at least ten to 15 percent of its population is Shiite and virtually all of them live on the eastern coast oil fields next to Bahrain.

Headquarters of US naval activity in the Gulf since 1948, the Navy’s 5th Fleet is responsible for protecting the Persian Gulf, the Red Sea, the Gulf of Oman, parts of the Indian Ocean and important shipping lanes in the area.  It was from Bahrain that the U.S. flew thousands of sorties against Iraq and, at the start of the Afghanistan war, Bahrain provided extensive basing and overflight clearances for U.S. aircraft. It is imperative for the U.S. and the Saudi government to keep Iran out of the area.

Unfortunately Iran has been training, funding and arming various Shiite terrorists groups in Yemen and Syria which they view as an extension of their own Islamic Revolutionary Guard.  One such group, the Houthi, aka Ansar Allah, a Zaidi Shiite terrorist/religious/political movement from Yemen, Saudi Arabia’s northern neighbor, was responsible for taking Yemen’s capital and most of the northern territory which Iran needed to dominate the southern Red Sea passage.   The strategic importance of controlling this strait is equal to controlling the crucial Suez Canal.

In 2015 the Iranian government bragged that it controlled the “arteries of oil transport, from Bab el-Mandeb Strait to Suez Canal and the Strait of Hormuz,” all of which were within range of Iranian missiles. And to prove their point, in October 2016, Houthi fired a long-range missile at a military base deep inside Saudi Arabia, and fired two missiles at a U.S. navy vessel in the Bab el-Mandeb Straight, raising questions about the effectiveness of an arms embargo. The C-8902 anti-ship missiles that the Houthis fired, while supplied by Iran, were of Chinese origin.

The Bab el-Mandeb Strait connects the Gulf of Aden to the Red Sea, the southern route to and from the Suez Canal. As much as 300,000 tons of shipping, including 3.8 million barrels of oil pass through this southern passage every day. Measuring just 18 miles across, this channel is the closest point between Central Africa and the Arabian Peninsula, with its northeastern edge in Yemen territory.   Almost all of the trade between Europe and Asia is seaborne and travels through the Bab el-Mandeb sea gate.  That amounts to almost $700 billion worth of trade each year that Iran could conceivable delay, sabotage, or stop dead in the water.  And while it is doubtful that Houthis is capable of closing the strait completely, at least at this time, just the mere threat of a missile attack could have significant economic and military repercussions.

Iran is perhaps the single best organized and aggressive player in the Middle East.  They have been an on-again, off-again regional power since the Persian Empire ruled much of the ancient world.  In addition to Houthis in Yemen, Iran backs Hezbollah in Lebanon, Syria, and Palestine, and undisciplined Shiite militias in Iraq. There is also evidence that Iranian agencies are active among Shiite populations in Kuwait, Saudi Arabia and Sudan. The only reason they have no footprint in Libya is because Libya has no natural Shiite constituency for Iran to throw its weight and power behind.

Iran’s strategic goal is to emerge as the dominant power in the Middle East and, eventually, the entire Islamic world, while destroying the U.S. and Israel in the process.
Can they be stopped or is it too late?  According to John Bolton “there should be little doubt that Iran, whose path to deliverable nuclear weapons was paved by Obama’s 2015 nuclear agreement, would readily use or threaten to use those weapons, or provide them to terrorists, to achieve regional hegemony. The grim reality is that Russia and Iran are functional allies in this and probably future Middle East wars, less interested today in destroying ISIS than in consolidating and expanding their positions in preparation for the next conflict.”

← Big Pharma Conspired to Destroy Cancer Medicine for 4,000% Profit Increase
Herbs and Plants You Can Smoke →