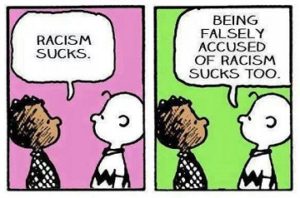 Racism is defined as a belief or doctrine that inherent differences among the various races determine cultural or individual achievement, usually involving the idea that one’s race is superior and has the right to rule others.  In today’s world racism has been redefined to include opposition to anything the left pushes.

If nothing else, let’s be honest!  Using the race card is nothing more than an attempt to inject emotion into an argument when the argument cannot stand on its on merit.

We’re constantly told we must treat everyone equally, regardless of the color of skin or their sexual orientation but, the minute you try to do just that, you’re accused of not taking into consideration the color of one’s skin or their sexual orientation.  Equality once meant that everyone had the same privileges or rights as the next guy. Now, we are told we must grant certain races or groups more privileges or special rights under the law to be equal.   If one race or group of people is more privileged under the law, isn’t that a double standard – the very essence of inequality?

And double standards rule!  When Obama was running for election, former Senator Dirty Harry Reid said of him that “the U.S. would be ready to embrace a black presidential candidate, especially one such as Obama – a light skinned African American with no Negro dialect, unless he wanted to have one.”   Wasn’t that racists?  The left didn’t think so, at least no publicly, but it was definitely insulting to both blacks and whites.   If this statement had been made by a Conservative or a Christian, the media and the NAACP would have had a hissy fit.

“White people are potential humans – they haven’t evolved yet” or my favorite, “White people are blue-eyed devils,”  are some of the milder statements made by Farrakhan.  Has he been called out for these racist remarks? No, the NAACP supports Farrakhan.  If a Conservative had said that Blacks were potential humans the far left would  have been up in arms!    Again, a double standard!

Even Oprah, one of the richest women in America, while not popular with Michelle, managed to take a racial jab at the very country that made her wealthy. In an interview with the BBC, she said that “old racists just have to die” before America overcomes its racist past. Those “racists white people” that helped elected Obama to office, don’t like him because he’s black.  Actually he isn’t black, his mother was white, but apparently that doesn’t matter when you’re trying to condemn a whole race of people.

Gordon Jenkins, the former black mayor of Monticello, New York, when arrested for drunk driving, went on an unhinged, vicious, anti-white rant while being processed at the police station, all of which was captured on video. He repeatedly referred to white police officers as “crackas” and characterized the black police officer processing his arrest as a traitor for not letting him off the hook. Despite Jenkins’s vitriolic racial epithets, there was no outrage in the controlled mass media. There can be no doubt that the situation would have been quite different had Jenkins been a white man spewing racial slurs.

According to  Earl Hutchinson,  Republicans can never not be racist because there are racist people in America who vote Republican.  You gotta love the logic!  But Hutchinson wasn’t through as all Republicans who live in the South are racists, including those that write blogs, have radio talk shows, etc. who think the “the GOP’s only flub is that it’s not truly conservative enough.”

Black Caucus Congressional member Bennie Thompson called Supreme Court Justice Clarence Thomas an “Uncle Tom” but he explained to reporter Dana Bash that it was okay because he’s black.  If you’re conservative and a Republican you’re automatically a bigot and if you’re black, conservative and a Repubican, not only are you a bigot but you aren’t black enough.

Black Lives Matter,  at its very essence, is an ideological reincarnation of the Black Panther movement that flourished in the Sixties.  They maintains that our “corrupt democracy” was built on “indigenous genocide and chattel slavery,” and continues to “thrive on the brutal exploitation of people of color;”  that the “ugly American traditions of patriarchy, classism, racism, and militarism” pervade every aspect of society; that “structural oppression prevents many from realizing their dreams;” and that blacks in the U.S. are routinely “dehumanized and targeted for extrajudicial killings…by police  and vigilantes”  in our “white supremacist system.”  If a white group was encouraging violence and targeting police as BLM loves to do, they would not be tolerated and rightfully so.

Courtland Millory, a black columnist, wrote that “a distinction needs to be made between words that rub some black people the wrong way and those meant to do us harm. . .When everybody is labeled a racist, then nobody is a racist.  When we habitually cry wolf, we risk not being able to recognize one when it actually shows up. . .The charge of racism is a distraction.”

← Centralized Power and Slavery
Have Doubts About Islam? →