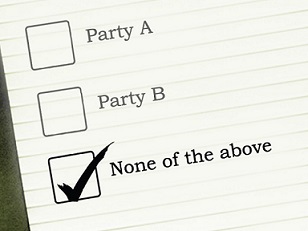 As the Virginia campaign for governor heats up I’m reminded of how much I hate elections.

Every candidate, no matter what party they are attached to, drones endlessly on about all the wonderful things they are going to do for us.  Trust me they say, I can create jobs, build the economy, replace the failing educational system, ad nauseam. Do they all have the same cheat sheet? Must we be bombarded constantly with empty rhetoric? Just once I would like to hear a candidate say ‘yes everything is a mess and no, I doubt seriously that I can fix it, but I’ll try.’

Is Peter Hitches right, “ Is there any point in public debate in a society where hardly anyone has been taught how to think, while millions have been taught what to think.” Even if we could find candidates serious about fixing the broken system we call government, would it even be possible? The current party ruling elite have no desire for change, no desire to hand over power to some upstart not of their choosing.

Tom DeWeese writes in Can We Take Back Our Election Process and Make the Parties Listen to Us, that “campaigns become little more than big PR projects, promoted in positive platitudes, specifically designed to assure nothing negative sticks. Just get through it and keep the gravy train running. Above all, do not talk about controversial subjects like dollar values, global trade or immigration; just stick to issues bought and paid for by special interests donors.”

Fixing the election process could be that simple. The voter, for a change, would be in the driver’s seat. No longer would we have to settle for the lesser of two evils. If all of the candidates are bad, none would be able to buy their way into office. Moreover, the power of entrenched incumbents who have been unbeatable due to their massive war chests and party ties would be broken. Just picture John McCain, or Nancy Pelosi, or Maxine Waters unable to run for office because they were rejected by NONE OF THE ABOVE!

Unfortunately, NONE OF THE ABOVE would only work if it has the power of law behind it. It cannot be just a protest vote that has no other meaning. It does not require a Constitutional Amendment because it can be done state by state. But getting state legislators, those who might have to face NONE OF THE ABOVE, to introduce such a state law could be difficult but,  probably less difficult and certainly safer than using a Convention of the States to set term limits.

Of course state legislators will instantly dismiss the idea as being too expensive, something they only care about if it affects them directly. However if it means getting better candidates, isn’t it worth it to hold a few special elections, especially when you consider how much bad candidates actually cost taxpayers? In fact, it probably wouldn’t take more than an election or two before the powers that be see the light – either they offer candidates the voters want or continue to loose elections.

No longer would special interest groups, corporate lobbyists and foreign interests profit by greasing the wheels, so to speak, in state and federal government because there would be no way to control election outcomes. And once NONE OF THE ABOVE is placed by law on every ballot in this country, America’s representative system would be restored.

Honestly, at this point I believe that the only way the system will ever change is if a giant meteor strikes D.C., wiping out every politician and lobbyist within a 100 mile radius. At least once the mess was cleaned up we’d have the opportunity to start fresh. But then the question begs – how long would it take for the greedy, money grubbing, power hungry politicians to once again gain control? Even a nuclear holocaust wouldn’t kill roaches.

“When politics is no longer a mission but a profession, politicians become more self-serving than public servants.” Emmanuel Macron

← Every Christian Should Pray
Bill 89 Victimizes Children for LGBT Agenda →