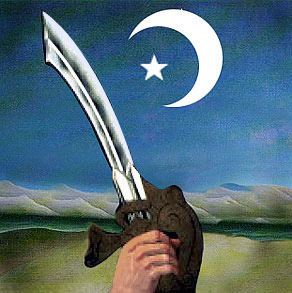 No, the Sharia Creep is not a new plant species, but it is just as invasive  as  the Kudzu vine well-known to Southerners.  It has found its way into the U.S. financial district, our schools, our government and court systems.  If its current rate of creep continues, it could well become a legally enforceable mandate.

The far left, helped along by the PC police, have developed an irresistible tolerance for the culture of Islam allowing Islam’s whispers to turn to shouts as this manufactured religion continues its assault on our freedoms and morals.  The left’s distorted view of Islam as a legitimate religion guarantees it not only a place in our free society but a means to fuel the conquest of our nation and the future subjugation of our people.

For those broad-minded Americans who have grown to accept Islam’s dynamic assimilation into U.S society, be warned.   Islam is not a religion it is a culture.   You can not  define  Islam as a belief system founded on personal choice as it is with Christianity, Judaism, Buddhism, or Hinduism – rather it is an ideological scheme defining all life’s choices, social order and laws.

More importantly, the Muslim belief system is grounded firmly in the conquest of its enemies and subordination of any conflicting faith or social order.  Islam is not a faith respecting free will and a search for God.   It is wholly materialistic, demanding adherence to its social precepts under penalty of death or enslavement.

Islam mandates conformity to a strict social construct that places Arab culture and its Islamic traditions above all things.   To a genuine Muslim there is no higher truth than found in the Koran.   God’s gift of free will is a falsehood and all things happen through the will of Allah.   Islam is the antithesis of religion and spirituality  existing only  to perpetuate the growth and dominance of its culture.

Islam is a fabricated religion designed by a man committed to world conquest. Unlike Christianity, there is no social benefit or charity for non-believers, Islam exists for the benefit of Muslims and Islam only.   Islamic prayer allows no spiritual openness, no intimate or personal contact with God.   It is purely a communal ritual designed to breed conformity of thought and action.   Worship or the expressing of love and awe is not necessary in the Islamic culture, only obedience and submission.

Islam is not tolerant.  The Islamic world is not only at conflict with non-believers, but also with its own people who are seeking to shed the shackles of social rule by its Sharia Law.   All over the world, as the police state that is Islam falters,  Islamic leaders turn on their own, slaughtering those who would dare to question the humanity and righteousness of violently enforced religious laws and social paradigms.

Do progressives truly believe that Islamic culture, a culture that promotes terrorism, forced marriage, murder, deceit, Sharia justice and the extermination of the Jewish race  is entitled to the same Constitutional protections afforded those that teach peace and spiritual altruism?   Or is it a means to an end?

Many of our elitist leaders have embraced Islam’s Arab Imperialism and are working hard to afford it legal protections against  criticism and challenge, as they  continue to work against the Constitutionally declared freedom of religion for Christians.  The Muslim Brotherhood is using our first amendment rights to secure a protected place at the legislative table.

This is not a conspiracy theory, it is part of their plan to conquer.  Can we really afford to legitimize a philosophy and culture that sanctions the execution of those who turn away from its totalitarian political ideology? Source:  Last Resistance,  John DeMayo

“The term “Sharia” (Arabic شريعة Šarīʿa; “way” or “path”) is the sacred law of Islam. Sharia law literally means religious code of life. It is used to refer both to the Islamic system of law and the totality of the Islamic way of life. Sharia guides all aspects of Muslim life including politics, daily routines, foods, clothing, amusements, sports, familial and religious obligations, and financial dealings. Traditional Muslims (all mullahs, Mawlanas, Muftis, and Islamic scholars) who understand the Quran and the Hadith believe that sharia expresses the highest and best goals for all societies on Earth. It is the “law of allah” and bound to be the best of all. Because of this ardent belief, devout and fanatical Muslims all over the world are in constant struggle (Jihad) with their ruling Government to establish “Islamic Sharia” as the country’s only rule by replacing modern secular democracy (Laws made by human)”  Syed Kamran Mirza.