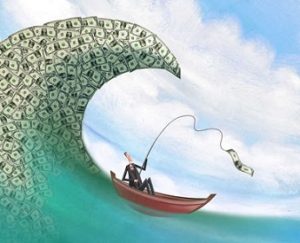 Beginning with Franklin D. Roosevelt’s New Deal, advocates for big government have used the working class poor and middle class Americans to justify their claim that government offers the only protection against the predations of the rich and powerful.

The New Deal was a series of federal public work projects, financial reforms and regulations, enacted in response to the Great Depression, that included support for farmers, the unemployed, etc. and new regulations and safeguards on the banking industry and changes to the monetary system. These new programs put the Democratic Party and its coalition of voters, the media and academia, in charge for the next seven out of nine Presidential terms and empowered liberal ideas, big city machines, labor unions and ethnic minorities. While the coalition has splintered somewhat over time, many of the New Deal programs that bound them together – Social Security, unemployment insurance and federal agricultural subsidies, for example – are still with us today.

Patrick Garry writes in The False Promise of Big Government,  that government promises hold special appeal during times of emergency when the public needs an immediate savior. Unfortunately this emergency mentality has led to the passage of numerous bills that only seek to expand government even more. Look at the Dodd-Frank Act in 2010 that substantially expanded, in ways that could not even be defined by the law, government regulation of the financial-services industry, from mega Wall Street investment firms to small town banks. Unfortunately, once the emergency passed, a more sober and rational public reassessed the need for a bigger government but by then, the expanded government had become entrenched in law.  Let’s face it, what Congress passes, Congresses never repeals – they adjust, rewrite, expand or amend, but never repeal.

From 2000 to 2016 federal spending more than doubled from $1.79 trillion to $3.85 trillion. Nearly 100,000 new federal rules have been issued since 1993, and the tax code is more than 4 million worlds long and growing. According to the Competitive Enterprise Institute, federal agencies in 2016 issued 3,853 regulations, while Congress passed 214 new laws. That is 18 rules for every law enacted.

Laws like Dodd-Frank and ObamaCare are so complicated that they cannot be understood without a platoon of lawyers. The tax code has become an instrument of government power brokers to extract money from private citizens to finance pet schemes of Washington’s political class.  According to American Enterprise Institute economist and blogger Mark Perry, some 70% of the federal budget, about $2.6 trillion, is transfer payments, [social engineering], – funds recycled from one set of private citizens to others through entitlements and welfare spending.

According to the CBO, federal spending on welfare and anti-poverty programs in 2016 reached $750 billion, almost twice what we give in donations to private charities. Bookshelves sag with reports and research showing the waste, inefficiency and counter-productiveness of welfare spending. Of course Congress will attempt to fix the problem with even more wasteful laws and government programs.

Recent data from the U.S. Treasury shows that the government has amassed $84.3 trillion in debts, liabilities and unfunded Social Security and Medicare obligations, or $670,000 for every household in the U.S. This fiscal burden equals 93% of the nation’s private wealth, including the combined value of every American’s assets in real estate, corporate stocks, small businesses, bonds, savings, cash and personal goods like automobiles and furniture. While $84.3 trillion is bad, it is only the tip of the iceberg.

A strong government is necessary but when used as a nanny for societies problems, it hurts those in need. The nanny state has fostered cronyism rather than competition. It treats people more like passive clients than active citizens. It has replaced opportunity with regulations that reinforce the status quo. It favors government bureaucracy over individual well-being.

As William Voegeli suggested in The Pity Party, big government advocacy stems from a “strong preference for political stances that demonstrate one’s heart is in the right place” and “a relative indifference to whether the policies based on those stances, as actually implemented, do or even can achieve their intended results.”

← A Murray Christmas for Obamacare?
Keep Christ in Christmas →