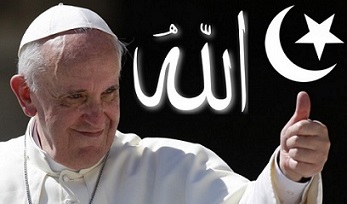 One of the big mysteries of our day is how so many supposedly enlightened Christian leaders have managed to ignore the truth about Islam for so long. 9/11, daily terror attacks, the accelerating Islamization of Europe, and the development of nuclear weapons by Pakistan and Iran – isn’t it time to tell the truth?

Not only are there deep differences in theology between Islam and Christianity but cultural and human differences as well. To put it bluntly, Christianity is humanizing and Islam is not. So the many declarations of commonality and solidarity with Islam that now routinely issues from the lips of the Pope and the far left religious community only serves to confuse and mislead.

Islam is an anti-Christian, anti-Jewish and anti any religion that isn’t Islam. Nahid Darwish, author of Wholly Different: Why I Chose Biblical Values Over Islamic Values, was born in Egypt and raised a devout Muslim before converting to Christianity. She writes that Islam is a counter-revolutionary faith, a rejection of core Bible beliefs. 64% of the Quran speaks of non-Muslims in very derogatory terms, calling for their death as an enemy of allah.

Muhammad considered himself to be a prophet, and wanted the world to accept him as such. The trouble is that a prophet has to have a prophetic message. And, after Jesus revealed himself as the Son of God and the fulfillment of all prophecy, there wasn’t much left to say in that line. So Muhammad decided to retell the story of Jesus, recasting him not as the son of God but as another, lesser “neutralized” prophet. According to Muhammad, Jesus wasn’t the son of God; He was not crucified nor resurrected, and played no role in the redemption of the human race.

The Quran, written some 600 years after the New Testament, is a collection of disconnected statements, warnings, and curses interspersed with Muhammad’s own version of stories borrowed from the Bible. There is no need of spiritual transformation in the Quran because man’s destiny is not union with God but union with maidens in paradise. There is no need of spiritual transformation because heaven is simply a better version of earth.

There is no story of salvation in Islam because the climax is not the Incarnation, but the mere example of the “ideal man.” Islam does not acknowledge original sin, grace, Trinity or Incarnation. As the unreachable creator, allah only demands obedience. If man falls, it is because man failed to obey. Reaching heaven is a constant struggle to balance the good deed against sins. Because allah is so distant and demands perfect obedience, then the constant failure of human beings can only be redeemed by other human beings. Forgiveness is only for allah on the other side of death, and grace is a hollow concept.

When Christians hear that Jesus is mentioned in the Quran, they assume that he must be someone like the Jesus of the Gospels. Thus they can reassure themselves that although Muslims don’t accept Christ’s divinity, they will at least become familiar with his life. However, anyone that takes the time to actually read the Quran will be disabused of that notion. There is no life in the Jesus Muhammad presents in the Quran. There is no slightly altered version of the gospel story, indeed, there is no story at all, just a few brief mentions in order to make the point that Jesus is only a man, not the son of God.

Indeed, the only character in the Quran that Muhammad seems truly interested in is himself. He manages to mention himself on nearly every page – sometimes as the “messenger,” sometimes as the “Apostle,” sometimes as the “prophet,” and nearly always as the indispensable intermediary between allah and men. This repeated emphasis on his role as a prophet is also found in the hadith collections

In light of the comparative bleakness of the Islamic vision, it is difficult to understand why so many Catholic prelates and theologians insist on identifying Islam as a fellow faith with which we have much in common. Likewise, it’s not easy to comprehend why so many of them want to declare their solidarity with Islam. Theologically and humanly, Islam represents a giant step backwards to a time when the idea of human dignity was laughable, when slavery was unremarkable and women less valued than man or animals.

In almost all respects, the Quran is simply old news. The only new element is the “revelation” that Muhammad is God’s final prophet. Compared to the tremendous and wondrous revelations in the New Testament, that’s small potatoes.  Again, one has to wonder why so many modern clerics are intent on drawing a moral equivalence between Christianity’s life-giving faith and Islam’s life-denying, rule-bound system.

You can read Islam: A Giant Step Backwards for Humanity by William Kilpatrick, first published at Crisis Magazine, at this link.