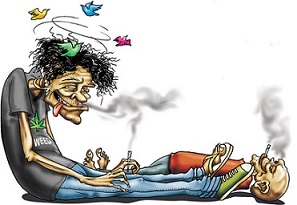 Over 77 million Americans have sniffed, smoked, swallowed or injected themselves with drugs for so-called recreational purposes. This drug use has not brought them freedom; instead, it has enslaved many to a destructive habit and allowed criminal organizations to overrun large portions of the country.

Thirty (30) states and the District of Columbia now have laws legalizing some form of marijuana use. Many are praising this as a positive development but it’s not, unless you are part of the Mexican drug cartel. The Mexican La Familia, Los Gueros, the Sinaloa and Tijuana cartels, with ties to Hispanic gangs in 240 cities across the U.S. are producing approximately 90% of the illegal pot grown in California, using illegals smuggled across the border.

In addition to forcing local ranchers to buy guns, guard dog and Kevlar vests, along with installing electronic gates in an attempt to protect their families, these illegal marijuana farms are leaving deep scars on public and private forests and wild areas. In addition to the use of toxic pesticides that seep into the land and water, the Cartels use miles of black plastic irrigation pipes to draw water from streams. Each pot plant requires anywhere from 6 to 15 gallons of water per day over 150 watering days. Ten thousand plants divert 60,000 gallons of water each day or 9 million gallons in a growing season. Little wonder that legal growers and farmers complain about water shortages. Besides destroying the habitat of wildlife such as the black tail deer, illegals poach deer and other animals for food and leave their trash strewn about for miles.

The legalization of Pot in Colorado has decimated the state in ways few ever considered. While the state coffers have collected a cool half a billion in taxes and fees, Marijuana-related traffic deaths increased by 154% between 2006 and 2014; Colorado emergency room hospital visits that were “likely related” to marijuana increased by 77% from 2011 to 2014; and drug-related suspensions/expulsions increased 40% from school years 2008/09 to 2013/14, according to a September 2015 report by the Rocky Mountain High Intensity Drug Traffic Area, a collaboration of federal, state and local drug enforcement agencies.

Other findings included data showing that seizures of Colorado pot being shipped out of state soared with an increase of 397% between 2008 and 2013. US Mail parcels were intercepted being shipped to 33 states, representing an increase of 1,280%. Increased distribution of and access to marijuana has also led to increases in crime, lab explosions, and pet poisonings.

There is a reason pot is classified as a Schedule I controlled dangerous substance, right along with heroin, LSD and ecstasy. Cannabis smoke only contains 400 compounds (that include 60 cannabinoids) but, because it is less combustible than tobacco, it contains 50% more carcinogenic polycyclic aromatic hydrocarbons that include naphthalene, benzanthracene, and benzopyrene, exposing your lungs to four times the toxins and tar of cigarette smoke.

With so much money at stake, the drug cartels are now breeding newer hybrid plants that contain even higher of THC and other toxins and addictive chemicals according to the US Drug Enforcement Administration. The levels of THC or tetrahydrocannabinol, pot’s main psychoactive ingredient, has risen from around 4% in 1995 to about 12% or higher, making pot even more addictive.

Smoking just one joint a day can damage the cells in the bronchial passages which protect the body against inhaled microorganisms and decrease the ability of the immune cells in the lungs to fight off fungi, bacteria, and tumor cells. For patients with already weakened immune systems, this means an increase in the possibility of dangerous pulmonary infections, including pneumonia, which often proves fatal in AIDS patients.

When people begin using marijuana as teenagers, the drug may impair thinking, memory, and learning functions and affect how the brain builds connections between the areas necessary for these functions. Researchers are still studying how long marijuana’s effects last and whether some changes may be permanent.

It has also been suggested that marijuana is at the root of many mental disorders, including acute toxic psychosis, panic attacks, flashbacks, delusions, depersonalization, hallucinations, paranoia, depression, and uncontrollable aggressiveness. Its use has long been known to trigger bipolar [manic-depressive] attacks, and schizophrenia. According to the Diagnostic and Statistical Manual of Mental Disorders, mental disorders connected to pot are Cannabis Intoxication, Cannabis Intoxication Delusions, Cannabis Induced Psychotic Disorder, Hallucinations; and Cannabis Induced Anxiety Disorder.

“Marijuana is not benign. We know it is dangerous to many users and addictive to some, and that is not something to be glossed over…Expanding availability and use, and reducing the perception of harm, will undoubtedly have a negative impact on public health.” Dr. Marc Myer, Director of the Hazelden Betty Ford Foundation’s Health Care Professional Program and Regional Medical Director for Adult Services in Minnesota.

← THIS CIVIL WAR
The Sheep Have Grown Horns →