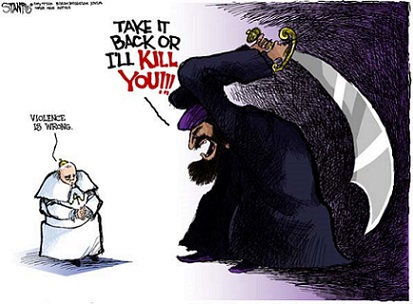 Why do Western Nations, left-wing church leaders and the Pope allow themselves to get roped into what William Kilpatrick would call the “common word” approach to Christian Islamic relations?   For those not familiar with the term, the Common Word Initiative began in 2007 with an open letter to the Christian world signed by 138 Muslim scholars. According to the “initiative” despite the differences between Christianity and Islam both share the “same Divine Origin” and the same Abrahamic heritages.

First you must understand that Muslims believe the Koran to be the literal word of their god, written in his mind before creation and dictated by the Arch Angel Gabriel to Muhammad over a 23 year period beginning in December 609 A.D. Assuming familiarity with major narratives recounted in the Christian Bible, stories about Adam, Abraham, Noah and Moses, Muhammad summarizes some, while offering his own alternative accounts and interpretations on others. In addition to denying the trinity, the crucifixion and the Resurrection, Muhammad demoted Christ from the son of God to a prophet of Allah.

Most are aware that in 2013 Pope Francis notoriously refused to attribute Islamic terrorism to religious motives, insisting that “Muslim terrorism” does not exist and that the “authentic Islam and the proper reading of the Koran are opposed to every form of violence.” However, his Secretary, Father Yoannis Lahzi Gaido, a Copt from Egypt, has more realistic views on “authentic” Islam, than his boss.

In Thank You Jesus, (Grazie Ges) Magdi Cristiano Allam, another well-known Egyptian who converted to Christianity in 2008, wrote: “Father Yoannis Lahzi Gaido, has a profound knowledge of the real Islam, as it is actually present in the hearts and minds of the majority of Muslims, and not distorted by the ignorance, naivety, good nature and ideological blindness of the West, which is exploited by mystifiers and hypocrites. He shares my position on Islam and refuses to hide the enormous difficulties under which Christians must live in places with a Muslim majority. These difficulties are NOT caused by a few Islamists, but by a culture of death and violence that is based on very clear verses [of their scripture] that they quote, calling for violence and jihad, saying they should murder all who are different and killing [those who express] freedom of conscience. Just to think differently is enough to be sentenced to death.”

Again, during a 2016 interview with a French Catholic Newspaper Pope Francis raised the ire of the Christian world when he said: “It is true that the idea of conquest is inherent in the soul of Islam. However, it is also possible to interpret the objective in Matthew’s Gospel, where Jesus sends his disciples to all nations, in terms of the same idea of conquest.” Was the Pope actually inferring that the Islamic principle of “jihad” is equal to the disciples’ proselytizing mission? I must have missed that part where Christ tells his disciples to take up arms against anyone who refused to accept Christianity!

The real danger in accepting the “same Divine Origin” thesis is that it grants an unwarranted legitimacy to the Koran and that, in turn, sends the wrong message to both Muslims and Christians. While it makes sense for Christian leaders to openly discuss different interpretations of scripture with Christian denominations and even with Jews, since all start from the same original revelation,  but how can you reconcile the Bible with the Koran when one is revelation and the other is not?

While it is not advisable to go around calling the Koran a fake, it is not advisable to treat it with great respect and excessive deference, like when the Southern Command guidelines for military personnel at Guantanamo Bay mandated that personnel wear clean gloves when they touch the Koran. These guidelines also require that the Koran be handled in a “manner signaling respect and reverence, as if it were a fragile piece of delicate art.” A good many of our so-called Christian leaders have fallen into the politically correct habit of treating the Koran the same way even though it is the main generator of Islamic violence.

The Islam Common Word Initiative is based on a passage in the Koran, verse 3:64 which translates

“Say: O people of the Book! Come to common terms as between us and you: that we worship none but Allah; that we associate no partners with him that we erect not, from among ourselves, lords and patrons other than Allah.”

Translated into English it would probably read: Listen, Christians! Agree with us that Jesus is not the Son of God, and that God is not a Trinity, and then we can talk.

“Pope Francis, well-intentioned or not, is still pretending like discussion can solve hundreds of years of hatred and persecution. He’s acting as if Islam has not declared war on Christianity, on Jews.” Cheryl K. Chumley

Sources: A Common Word Versus Common Sense by William Kilpatrick