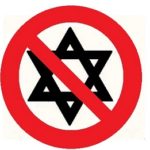 “The very word “Zionist” has now been tarred by a generation of anti-Israel propaganda, most of it easily seen to be false, except to the True Believers of the Left, who are quite happy to think the worst about democratic Israel. Most Leftist Churches have given up their faith in God, and substituted instead faith in the Left. They are therefore simply following a political party line, certainly not the example of Christ.” James Lewis, American Thinker

There seems to be a lot of confusion within the Christian community about Israel, about Jews and Zionists in particular.

The word Jew is listed 32 times in the King James Bible, 10 of which are in the Old Testament. The ancient Hebrew for Jew is the word Yhuwdiy,(Yeh hoo dee) meaning a descendent of the tribe of Judah. It has no other meaning. In the New Testament, the Greek word for Jew is Ioudaios (Ee 00 dah yos) meaning belonging to Judah in the sense of land or country, or of the tribe of Judah by birth. Those are the only two meanings the word has.  But, what was once an ethnicity of one of the houses of Israel gradually came to be known as a religion of all the 12 tribes as they wandered from place to place, with one religion uniting them. Judaism as a religion is basically a simple way of life of observing the traditional Jewish rituals ordained in the Torah. That is not to say that there are not numerous factions within this religious community, as in the Christian community, that push man’s traditions  rather than God’s teaching.

Zionism itself is not a religious movement; it is but one faction within the Jewish Community. One might say that all Zionist are Jews but not all Jews are Zionists. The Zionist movement came about in Europe in the late nineteenth century from a desire to end the exile of the Jewish people. It was a revolutionary movement that asserted a right to statehood, self-determination, self-defense, and self-empowerment, in the historic Jewish homeland. The Jewish religious establishment was originally opposed to Zionism but later tried to take it over and direct the movement.

According to Rabbi Jack Abramowitz, in its most basic form Zionism is the idea that Jews can self-determine in the land of Israel before the Messiah arrives. But some sects of Judaism do not subscribe to this goal based on the Shalosh Shevuous (three oaths) from the Talmud, one of which says that Israelis should not try to take back the land of Israel, in exchange for which the nations of the world would not unduly oppress them. They also believed that as a nation Israel should not exist again until the Messianic era.

The Talmud, unlike the Torah given by God to Moses, is a collection of writings, sermons, legal opinions, debates, and discussions written down by various Rabbis that also includes fringe and minority viewpoints that are not even accepted by Judaism. As traditions of man rather than God, it is however studied and used at times as religious doctrine. It sort of reminds me of the doctrinal books published by various Christian denominations that attempt to usurp God’s word with traditions. Rather than embrace God’s word through the Old Testament prophets, some Christians and Jews prefer to place their eternity in the hands of men.  There are many distortions and out-and-out lies published on the web about the Talmud so if you truly want to understand it I’d recommend The Real Truth About the Talmud which you can read at this link.

Many misconceptions exist about Zionism. The first is that Zionism did not particularly aim to settle the Holy Land but were willing to settle in places such as East Africa and Cyprus. While it is true these locations were considered as temporary asylums to alleviate the suffering of Russian Jews, they were never accepted as end goals for settlement. Another myth claims that Zionism aspires to extend the borders of Israel throughout the Middle East. That also is false. Of course they want the largest possible territory for the Jewish state within the ancient territory of Israel and Judea but they were willing to accept partition of the British mandate in 1922, a tiny truncated state offered in 1937, and the UN partition resolution of 1947.

Anti-Zionism is often used as a euphemism to conceal a thinly veiled hatred of Jews. It is a prejudice against the Jewish movement for self-determination and the right of the Jewish people to a homeland in the State of Israel. It may be motivated by or result in anti-Semitism, or it may create a climate in which anti-Semitism becomes more acceptable.

Martin Luther King, Jr. once said that “When people criticize Zionists they mean Jews. You’re talking anti-Semitism.” To oppose Zionism is to refuse to accept its political offspring, Israel, as a legitimate entity.

Zionism reversed Jewish historical passivity to persecution and asserted the Jewish right to self-determination and independent survival. This is why anti-Zionists see it as a perversion of Jewish humanism. Zionism entails the difficulty of dealing with sometimes impossible moral dilemmas, which traditional Jewish passivity in the wake of historical persecution had never faced. By negating Zionism, the anti-Semite is arguing that the Jew must always be the victim, for victims do no wrong and deserve our sympathy and support.

“Israel errs like all other nations: it is normal. What anti-Zionists find so obscene is that Israel is neither martyr nor saint. Their outrage refuses legitimacy to a people’s national liberation movement. Israel’s stubborn refusal to comply with the invitation to commit national suicide and thereby regain a supposedly lost moral ground draws condemnation. Jews now have the right to self-determination, and that is what the anti-Semites dislike so much.” Emanuele Ottolenghi

← A New World Order – China and the Vatican
What if Abortionists Used Guns? →