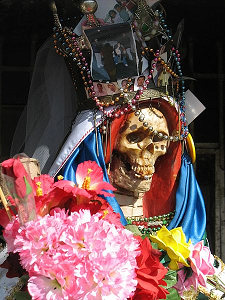 Modern Paganism is a collective term for new religious movements influenced by or claiming to be derived from the various historical pagan beliefs of pre-modern Europe, North Africa and the Near East. Although they do share similarities, these movements are diverse and no single set of beliefs, practices or texts are shared.

Wicca, introduced into the US by Gerald Gardner in 1964, is the largest of these movements. Now officially recognized as a religion, some judges have forced communities to allow Wicca led prayers at local government meetings and prisons to allow participants to have so-called “sacred objects” in their cells to “cast” spells. In 2007, the Department of Veterans Affairs was sued to allow a five pointed star inside a circle to be placed on tombstones at Arlington National Cemetery and other military burial grounds. It is now also common to find covens that routinely worship on U.S. military bases. Wiccans claim to not believe in Satan or God, worshipping instead a god and goddess that represent the sun and moon and mother earth. There are also Dianic wiccans who worship the goddess Diana and Hectatian wiccans who worship Hectate.

Satanic Spiritualists believe that Satan is a god and they pursue interaction with him and other evil spirits. Satan is, in their world, the true creator who brings knowledge and expects his followers to apply this knowledge and transform their own souls into godheads. Christ is said to be fictitious and stolen from pagan legends. Demons, the original gods, are friends of humanity.

To this group of out-side-of-the-box New Age religions you can also add GAIA worship, Satanism, Spirituality, Mysticism, Pantheism, etc. A relatively new addition to this list came to the U.S. via the Aztecs

Before the Spanish conquest of Mexico, the Aztecs worshipped Mictecacihuat, aka, Lady of the Land of the Dead. After Spanish colonists introduced the Grim Reaper and the Virgin Mary to Mexico, the locals combined these figures to produce a pagan hybrid deity they called Santa Muerte, aka, Holy Death. Whether shown on a candle, medallion or statute, Santa Muerte is depicted as a skeleton Grim Reapress carrying a scythe and wearing a shroud.

As a “saint of last resort,” Santa Muerte has always had a following in Mexico among the poor, criminals and drug dealers.  Adherents generally consider her to be a jealous and vengeful deity who demands that her followers conduct rituals and sacrifices properly to avoid her divine wrath. Candle magic, herbs, oils, amulets, spiritual energy, and various mystical items play an important role. The bases of candles and statues may have items or artifacts embedded in them and may be anointed with oils and herbs to enhance their power. More extreme forms of worship involve bowls of blood—animal and human—at the altars and smeared on the religious icons and on the devotee as part of a blood pact.

In some instances, at least in Mexico, drug traffickers have offered up ritual human sacrifices in front of her shines in return for her protection. According to an article in the Telegraph, Children sacrificed to Mexico’s cult of Saint Death, eight people were arrested for allegedly killing two 10 years boys and a 55 year old woman in ritual sacrifices. Mexican prosecutors said that the victims’ blood was poured around an altar.

The grisly slayings recalled the notorious “narco-satanicos” killings of the 1980s, when 15 bodies, many of them with signs of ritual sacrifice, were unearthed at a ranch outside the border city of Matamoros. The murders were committed by a cult of drug traffickers who believed that ritual sacrifices would shield them from police.  And while they have no connection to the Saint Death cult, the two share some similarities.

According to a 2006 FBI Law Enforcement Bulletin, four human sacrifices relating to the worship of Santa Muerte have already been documented in the United States.

There are estimated to be some 10 to 13 million devotees, mostly in Mexico, but a significant number is now appearing in the United States mostly where large numbers of illegals reside such as in Chicago, Houston, Los Angeles and New York City.  In northern California, the worship of Santa Muerte has spread beyond the immigrant communities, encompassing a growing number of artists, intellectuals, politicians, actors, police, gang members, prisoners and sex workers.

Professor Lois Ann Lorentzen, Chair of the Department of Theology and Religious Studies at the University of San Francisco, says that this cult serves to keep transgendered sex workers connected to the Catholic faith they were raised in but now feel ostracized from. “They, {the sex workers and transgenders}  do not differentiate between Holy Death and the more traditional Catholic saints. Their prayers to Santa Muerte evoke both Jesus and God.”

The Vatican has repeatedly denounced Santa Muerte which is being incorporated into the Day of the Dead celebrations.  “It’s not religion just because it’s dressed up like religion; it’s a blasphemy against religion,” said Cardinal Gianfranco Ravasi, president of the Vatican’s Pontifical Council for Culture. Catholic Bishops within the United States are now lending their voice in condemnation as well.

The Day of the Dead celebrated in Mexico and in some parts of the United States came from an ancient Aztec goddess Lady of the Dead.  Today she is known as La Calavera Catrina depicted by artist Jose Posado as a female skeleton wearing only a hat.  Originally celebrated at the beginning of summer, the Catholic Church  merged this pagan custom into their All Saints Day celebration.

On the one hand, the Santa Muerte cult is uncatholic, extravagant, and sometimes horrifying. On the other hand, churches are losing their flocks at alarming rates, even in predominantly Catholic Mexico. At the Santa Muerte’s most famous shrine in downtown Mexico City, traditional rosaries are said and young men crawl on their knees for blocks, cradling the holy skeleton in their arms. Instead of lighting incense, they exhale smoke from marijuana cigarettes for the Muerte to inhale.

← Warnings from a Survivor of Communism
Does Holiness Matter Anymore? →