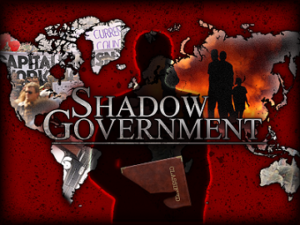 “Behind the ostensible government sits enthroned an invisible government owing no allegiance and acknowledging no responsibility to the people. To destroy this invisible government, to befoul the unholy alliance between corrupt business and corrupt politics is the first task of the statesmanship of the day.” President Theodore Roosevelt, An Autobiography, 1913 (Appendix B)

In recent months apprehensions about a deep state, led by intelligence officials at the FBI, CIA and Justice Department, have acquired a fresh prominence. Pastor Franklin Graham has been sounding alarms about a “coup d’état” against Donald Trump, and Trump himself is warning on Twitter about the sinister operations of a “Deep State Justice Department.”

A Monmouth University poll published on March 19 proved there is a deep distrust of the government with a majority of those polled believing that a group of unelected government and military officials secretly run the government. The same poll estimated that 8 out of 10 also believe the government spies on the activities of American citizens.  Perhaps they have a legitimate reason to be concerned!  Since the Constitution was ratified the size of the executive branch has exploded to almost 3000 times its original size with well over 2 million nonmilitary employees spread across 15 departments, 69 agencies and 383 nonmilitary subcommittees. And while they do answer to the President, there are far too many for one person to manage. That is why new presidents often find themselves in conflict with “deep state” operatives appointed by their predecessors. This administrative state is starting to act like a 4th branch of government, a branch that arguably has a larger impact on citizens than the other three branches combined.

So, does the deep state really exist? Is there a concerted effort to subvert the Trump administration?  Or is the deep state (shadow government) a figment of our imagination?

Robert W. Merry, a political editor of The National Interest and the author of books on American history and foreign policy agrees that the Deep State Is Very Real. “Human nature tells us that power corrupts.  As Lord Acton put it; when power is concentrated and entrenched, it will be abused; that, when it is concentrated and entrenched in secrecy, it will be abused in secret. That’s the Deep State.

George Beebe, Director for Intelligence and National Security at the Center for the National Interest and former director of CIA’s Russia analysis also says yes, if by Deep State, you mean that parts of our national security apparatus has the capability, albeit not the legal authority, to abuse intelligence to alter outcomes of national elections or distortion of public-policy debates.  Lyndon Johnson believed that the CIA had conspired against him at the 1960 Democratic convention to ensure that John F. Kennedy won the nomination. Richard Nixon was equally convinced that the CIA had helped to swing the subsequent presidential election to Kennedy.

Michael Lind, co-founder of New America, a columnist for Salon, the New York Times and the Financial Times, says that the deep state, in his view, is not so much part of the government but rather a group of global elites who have deliberately weakened the bargaining power of workers through a combination of austerity, induced unemployment, offshoring and mass low- skilled immigration. They restructured the global economy to crush labor and restructure government to minimize accountability by shifting decision making from legislators to the executive and judicial agencies and by enabling treaties and transnational agencies like the EU to replace or modify statutory law.

Mike Lofgren, author and a former Republican U.S. Congressional aide, in his latest book The Deep State, writes that our government has grown more and more resistant to the popular will as they have become hardwired into a corporate and private influence network with almost unlimited cash to enforce its will. This shadow government is the Deep State “that pays little heed to the plain words of the Constitution. Its governing philosophy profoundly influences foreign and national security policy along with domestic spending priorities, trade, investment, income inequality, privatization of government services, media views and the whole meaning and worth of citizens’ participation in their government.” He further writes that “It is the red thread that runs through the war on terrorism and the militarization of foreign policy, the financialization and deindustrialization of the American economy, and the political dysfunction that has paralyzed day-to-day government.”

In order to fully appreciate the deep state and the threat it poses to us, it’s necessary to first grasp the notion of civil-military relations so says Professor Patricia Shields of Texas State University.  In the U.S., the military is subordinated to civilian control. The president, though a civilian, is also the commander-in-chief of the armed forces. However,  once the military becomes sufficiently strong to defeat civilian militia, a paradox emerges: “Paradoxically, an effective military is then strong enough to threaten the polity itself. This paradox known as the ‘civil-military problematique’ is at the heart of CMR theory and practice. The threat is that when the policy preferences of unelected administrators in the military-intelligence bureaucracy diverge from those of elected leaders, the bureaucrats can choose not to carry out the orders of its civilian bosses. For those skeptics, Professor Shields notes that the armed forces sidestepped Clinton’s campaign promise to fully integrate gays into the military with virtually no consequence.”

I don’t believe there could be any disagreement that our government is greatly influenced by a group of embedded elites who see themselves as superior to the rule of law.  Revelations about the deep underbelly of the government is a daily occurrence  but, could it come to a military dictatorship as Professor Shields suggests?

“There is no doubt that Trump’s enemies within the deep state will not give up easily. One can compare his fight with the establishment as that of David vs Goliath. According to the Bible it was David who won the battle. How it will work out this time remains to be seen.” Edward Lozansky, President of the American University in Moscow