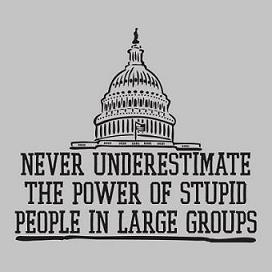 “Someone once defined metaphysics as searching in a dark room for a black cat that isn’t there. For the last 35 years in Washington, D.C., I have been searching for rational government policies. And, like that black cat, I’m starting to doubt that it is actually there.” James Bovard

Congress is working on a new farm bill to cover the next four years’ handout to big agriculture. Are they going to present another bloated farm bill?  Of course they are in spite of the fact of the failures of their farm subsidy programs which have become a stark reminder of why D.C.’s power and spending needs to be radically slashed across the board. Subsidies distort markets, harm the environment, line the pockets of the rich and cost taxpayers billions.

The government gives away more than $20 billion every year of taxpayer’s money in the form of subsidies to more than 39% of this country’s 2 million farms, the majority of which, (60%) goes to the largest 10% of farms, for subsidies of the three largest crop programs,  i.e. insurance, Agriculture Risk, and Price Loss Coverage.  The Environmental Working Group found that 50 people on the Forbes 400 list of the wealthiest Americans have received farm subsidies. But today the largest pot of subsidies is laundered through crop-insurance companies, a practice that hides the identities of the recipients. However, the Government Accountability Office found that at least four current recipients of these subsidies have a net worth of more than $1.5 billion.

Federal farm subsidies were instituted in response to market failure brought on by government interference. What else is new?

In 1933 FDR’s Agriculture Adjustment Act sought to cure the problem of “overproduction” of crops, and low prices for those crops, by paying farmers to produce less crops, reasoning that smaller harvests would raise crop prices. What the government did, during a depression, not only raised crop prices, but raise the prices that Americans had to pay when buying those crops. In addition, the government created an artificial “shortage” forcing the importation of the same crops from foreign nations. It was the same principle that the government adopted for oil.

By 1982 it was evident that farm subsidies had created a monster. The U.S. had a huge grain surplus because federal price supports had made American crops uncompetitive on the world’s market. Farmers could earn more by dumping their harvest on USSDA instead of selling it in the marketplace, causing farm program costs to double and the USDA stuck with the largest government owned crop surpluses in history.

In response, the Reagan administration launched the Payment in Kind program, giving farmers $25 billion of surplus crops to sway them to “idle” their land, in addition to $50 billion in other handouts. The 78 million acres that were “shut down” was more than double the entire land mass of Alabama, or the entire states of Ohio, Indiana and much of Illinois. Congress rejoiced but more than a quarter million jobs for farm laborers and farm related businesses were lost at a time when the nation was struggling to recover from the worst recession since WWII. Throughout the Midwest, hundreds of fertilizer, farm equipment and seed dealers had to close their door because Payment in Kind cut their sales by up to 50%. The cutback in harvests, combined with a drought, spurred a spike in feed grain prices that bankrupted vast numbers of unsubsidized poultry, cattle, and pork producers.  By 1995 consumers and taxpayers had been forced to pay more than $370 billion in handouts for farmers. For the same amount of money, the government could have purchased all the farmland in 41 states.

In another attempt to “fix” the problem they had created, Congress, under the leadership of President Clinton, passed the Freedom to Farm Act in 1996, a law loudly hailed by conservative think tanks and media giants as the end to farm subsidies. Really? Like most government programs, they just changed the name by which they gave taxpayer money away. Touted as “Market Transition Payments” rather than handouts, the Freedom to Farm Act actually tripled  the subsidies government paid out. Wheat farmers got 50 times more in subsidies for their 1996 crops than they would have received if Congress had merely extended the existing farm program. Naturally “Market Transition Payments” were so popular that Congress extended them, eventually dropping any pretense that they weren’t subsidies.

Every farm bill since (2002, 2008, 2014) has increased subsidies. The 2008 bill was so bad that even big-spending President George W. Bush vetoed it, although he was overridden by Congress. The 2014 bill ended one major subsidy program but added two new ones: Agriculture Risk Coverage and Price Loss Coverage, that has cost billions more than we were promised. The largest subsidy program, crop insurance, now costs $8 billion a year, or double the average cost during the Bush years.

Trumps 2018 budget targeted farm subsidies for crop insurance, conservation assistance and rural development programs, to no avail. His 2019 budget is once again hoping to end subsides for farmers with incomes above $500,000 a year but you can bet that big agriculture’s hired guns will convince Congress to yet again line the pockets of those that need it least at the expense of those who can least afford the loss.

← Humanitarian Imperative, a Tool of Satan?
Call For Pastors to Be Bold and Courageous →