Obama calls for the redistribution of  people’s   wealth.  To quote Obama, “My individual salvation can’t come about without some kind of collective salvation for the country.

Collective  Salvation  seeks the subjugation of religious freedoms to those adequate to government’s desires. The Collective mindset sees a group of individuals as having a single idenity. It demands the group be more important than the individual. No one can have salvation unless everyone has salvation progressivism.

Here is an excerpt from the Emergent Manifesto: “The new collective spirituality leads people into a socialist community where social justice becomes a means of salvation. This collective salvation includes whole cultures and communities who follow the way of someone referred to as Jesus.”

James Cone, “There is no contradiction between the Social Justice Movement of Black Power and Civil Rights and the message of Jesus Christ. Now if the power for in this society, the white people, if they want to become Christians, they have to give up that power. You just don’t say please forgive me now. The only way in which your repentance can be authentic is that you give back what you took, and white people took a lot from black people.”

Rev. Jeremiah Wright, “Even the leapers are cleansed. That means healthcare is provided so that even the so-called incurable are cured. The only way that can happen is for the have and have more to stop hoarding what they got and start sharing what they got with the have nots. We’re talking about a Revolution.”

The word ‘slave’ comes from the people of Eastern Europe, the Slavs. People becoming slaves were sold into slavery by a parent, being a child of a slave, through kidnapping, by slave raiders, pirates, owing a debt, or being captured by war. The most of these slaves were white people .

While much has been written about the Trans-Atlantic slavery trade, almost no attention has

been given to the Islamic slave trade. The European  involvment in slave trade to the Americas lasted a little over 3 centuries, the Arab slave trade lasted 14 centuries and still exist today in some parts of the Muslim world.

Two out of 3 slaves brought to the Americas were men used for agricultural work, while two out of 3 were women enslaved by the Muslims and were used for sexual exploitation, i.e., concubines, harems and for military service. During transit to America the mortality rate was as high as 10%, while mortality rate in transit to the middle east was between 80 and 90%. Slaves brought to America could marry, have families and today, their decendents  total in the millions and are citizens of the U.S.

Male slaves destined for the Middle East were castrated. Most children born to the slave women in the Middle East were killed and there are very, very few descendents that survived. Out of the 11 million African slaves that were transported across the Atlantic, 95% went to Central and South America, (Portuguese, French and Spanish possessions), and only 5% came to the United States.

There were as many as 28 million enslaved in the Muslim Middle East and it is estimated that from the Muslim raids into Africa, the death toll from 14 centuries is between 112 to 140 million with some calculations as high as 180 million. 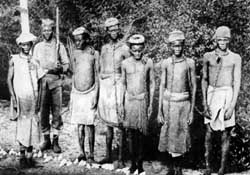 During the African Slave Trade, an embarrassing fact of history is, the Europeans did not have to venture into the jungles of Africa to capture these free people. The people were sold into slavery by their own African Chiefs or by the Muslim slave traders at the coast.

Slavery has always been viciously criticised in Britian and especially America, without any criticism given to the African Chiefs or the Muslim slave raiders. The sad, ugly and disgraceful truth is the Trans Atlantic slave trade has 3 guilty partners in crime; the African Chiefs, the Muslim Arabs and the Europeans.

100 years after President Abraham Lincoln issued the Emancipation Proclamation and 130 years after the British Empire set all slaves free in 1815, Muslim slave traders enslaved an additional 2 million Africans. Saudi Arabia and Yemen in 1962, and Mauritania in 1980, begrudgingly removed legalized slavery, only after international pressure was applied. Today it is documented by numerous international organizations that slavery still continues in some Muslim countries.

Seldom remembered is that many black people in the 19th century were owners of slaves. According to the 1830 United States Census, in just one town of Charleston, South Carolina, 407 black Americans owned black slaves themselves.

Islamic  Trade: Ronald Segal in “Islam’s Black Slaves” documents, “When Islam conquered the Persian Sassanid Empire and much of the Byzantine Empire, including Syria and Egypt, “Female slaves  were required in considerable numbers for musicians, singers and dancers. Many more were bought for domestic workers and many were in demand as concubines. The harems of rulers could be enormous. The harem of Abdal Rahman lll (912 – 961) in Cordoba contained over 6000 concubines! And the one in the Fatimid Palace in Ciro has twice as many.” Also revealed:  “the castration of male salves was common place with widespread homosexual relations.”

Segal notes that Islamic teachers throughout the 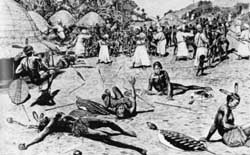 centries consistently defended slavery: “For there must be masters and slaves. Black lack self-control and steadiness of mind and they are overcome by fickleness, foolishness and ignorance. Such are the blacks who live in the extremity of the land of Ethiopia, the Nubians, Zanj and the like.”

Segal records: “In the 1570’s, a Frenchman visiting Egypt, found many thousands of blacks on sale in Cairo on the market days. In 1665 Father Antonios Gonzalis, a Spanish/Belgian traveler, reported 800 – 1000 slaves on sale in the Cairo market on a single day.

In 1796, a British traveler reported a caravan of 5000 slaves departing from Darfur. In 1838, it was estimated that 10,000 to 12,000 slaves were arriving in Cairo each year. Just in the Arabic plantations off the East Coast of Africa, on the island of Zanzibar and Pemba, there were 769,000 black slaves. Segal also observed that: “White slaves from Christian Spain, Central and Eastern Europe” were also shipped to the Middle East. “All Slavic eunuchs are castrated in that region. 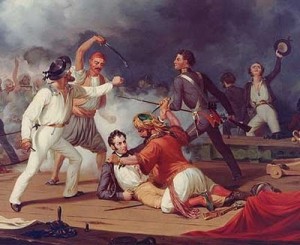 Thousands of white christians in the coastal areas were seized  to work as galley slaves, labourers, and concubines for the North African Slave Masters in Morocco, Tunisia, Algeria and Libya. Italy, Spain, Portugal, and France were hardest hit but the Muslim raiders captured people as far as Britian, Ireland and Iceland.”

Female slaves were sexually abused in harems while others were held as hostages bargaining for ransom. “The most unlucky ended up forgotten, stuck out in the desert in some sleepy town such as Suez or a Turkish Sultanate galley where some slaves rowed for decades without ever setting foot on shore.”

The Trans-Sahara slave trade included the kidnapping and castration of young boys sold as eunchs for use in the homes of wealthy Arab landlords. The Muslim slave trade typically dealt with the sale of castrated male slaves.

Eunchs were created on boys of 8 to 12 years old by total amputation. Hundreds bled to death during the procedure, with a survival rate of 1 in 10 to 1 in 30. These boys brought the highest price for Muslims at the slave market.

Sharia Law contains elaborate regulations for slavery. Mohammad himself had numerous slaves which he captured or bought. (The names of 40 slaves are recorded by Muslim chronicals.) Under Sharia a slave has no rights, cannot own property cannot marry without without his master’s concent and is considered moveable property. Muslim slave owners are entitled to sexually expoit their slaves or hire them out for prostitution.

A must see video

Few people in the United States know about Islam and slavery. From the day that Mohammad drew his sword to conquer and rob non-Muslims, to this very day, Islam authorizes the taking of slaves. 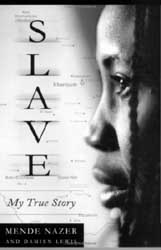 In her book, “Slave: My True Story”, Mende Nazer writes she was captured in 1992 and was enslaved by a rich Arab family in Khartoum and then, in 2002 was a slave to a Sundanese diplomat in London from whom she escaped and sought political asylum.

History has proven, not only Africans were slaves, but all races have been slaves and have also owned slaves at one time or other.

My question would be; why would any African, Black or White American want to become Muslim, or support anyone who defends the Muslims or Islam?

How you vote will determine your destiny. Think about it!