“I am not aligned to the right, but I have not changed my conviction that in a healthy nation there should be a left and a right, both entitled to an equal share of radicalism,” said Olavo de Carvalho, who, although having a low leftist behavior and language, is treated by his adherents, called “olavetes,” as the greatest right-wing leader in Brazil.

“I am not aligned to the right, but I have not changed my conviction that in a healthy nation there should be a left and a right, both entitled to an equal share of radicalism.”

After all, is Carvalho a right-winger or left-winger? Is he a Catholic or an occultist? Is he an astrologer or not? Is he a philosopher or not? Does he promote or attack René Guénon and the New Age?

Olavetes themselves get confused when trying to define him, because his comments often seem to point clearly in one direction… but carry sophisticated insinuations that sabotage the alleged clarity, pointing to other, even contrary, directions.

Quite different from the evangelical simplicity, which follows the words of Jesus, who said:

As the forked tongue of the serpent goes in two directions, Carvalho’s words often go in two directions. They go on “yes” and “no” simultaneously. At the same time he says that the Islamic sorcerer René Guénon is not recommended, he does not cease to exalt him. Guénon, who founded the Traditionalist School, which is esoteric and anti-Marxist in nature, is the spiritual father of two bifurcated right-wingers: Olavo de Carvalho and Aleksander Dugin, who were fundamentally influenced by the Traditionalist School.

Guénon, who was a master of bifurcations, was also one of the greatest promoters of perennialism, which seeks by philosophy to unite the conservatism of all religions. It is essentially New Age.

Carvalho and Dugin are considered great figures within perennialism, although Carvalho, with its bifurcated tongue, feigns distance. In 2017, Carvalho said, “It’s not a problem but I’ve rarely met people as sophisticatedly false and lying as in the so-called ‘perennialist’ environment.”

“It’s not a problem but I’ve rarely met people as sophisticatedly false and lying as in the so-called ‘perennialist’ environment.”

“Sophisticatedly false and lying people” is another term for people with a bifurcated tongue!

This makes Guénon and his adherents charlatans — a term which, according to the Brazil’s Michaelis Dictionary, means “one who exploits the good faith of the public. Individual with pretensions, usually blatant, of knowledge and skills.”

The Merriam-Webster Dictionary, the most famous US dictionary, defines charlatan as “a person who falsely pretends to know or be something in order to deceive people” and “one making usually showy pretenses to knowledge or ability.”

The Oxford Dictionary, England’s most famous, defines charlatan as “a person falsely claiming to have a special knowledge or skill.”

However, when mentioning that the Protestant writer C. S. Lewis called Guénon a charlatan, Carvalho readily defended the founder of the Traditionalist School, declaring, with his bifurcated tongue, that “Guénon was never a charlatan.”

In this perspective, Carvalho and Dugin were never charlatans either. It can also be said that Carvalho was never an astrologer, occultist, esoteric, perennialist, neocon, traditionalist and René Guénon’s main disciple in Brazil.

For those who think Carvalho is the father of a new right in Brazil, consisting of olavetes, Carvalho’s own bifurcated tongue responds, “I do not know what the new right is. I want them to screw. It’s a bunch of swindlers,” in an interview with Folha de S. Paulo, a newspaper he loathes as left-wing, but he does not miss a single opportunity to be interviewed by them. To abhor and accept at the same time is a bifurcated attitude.

Does anyone doubt that olavetes are a bunch of swindlers? Carvalho’s bifurcated answer only confirms what many have already realized.

“That’s why when I am introduced as a ‘conservative philosopher,’ the only answer I can think of is: ‘Conservative is the bitch who gave birth to you, who kept you in her belly for nine months instead of letting you fall into the toilet.’”

“If the Brazilian right accepts as a ‘leader’ anyone that the mainstream media presents to him as such, the future of the left is guaranteed.”

Other bifurcated comments by Carvalho:

* “The right is full of pure mentally sick people.”

“That’s why when I am introduced as a ‘conservative philosopher,’ the only answer I can think of is: ‘Conservative is the bitch who gave birth to you, who kept you in her belly for nine months instead of letting you fall into the toilet.’”

* “The stupidity of others is the scourge of my life, but it is also my source of sustenance.”

“The right is full of pure mentally sick people.”

“If I only knew the shit the Brazilian right would turn out with the assistance of… Julios Severos.”

Why does he feign concern about the right if his bifurcated tongue has already said that he is neither a right-winger nor a left-winger? Why does he indoctrinate his olavetes to repeat the mantra that he broke the hegemony of the Brazilian left when reality, based on facts, shows that this hegemony was broken by evangelicals?

No wonder he says that the evangelical simplicity is the “most abominable thing in the world.” His revolt is justified, for he knows what every leftist knows: the main merit of resistance to the Brazilian left belongs to evangelicals, especially televangelists. In fact, even the institute that he has in the US is the fruit of John Haskins, an American Protestant who long ago apostatized his church. Haskins founded the Inter-American Institute and brought together Protestants and Catholics.

Carvalho’s only merit is to awaken activists for the revisionism of the Inquisition. What is left is ideological plagiarism. His geopolitical view, for example, is clearly neocon in nature.

However, mantra and hypnosis gain such control of the mind that some give him merit for everything, repeating untruths without realizing it.

In no way did I help to inflame the mental illness and degradation that you see today in Carvalho’s right. My conservatism has a good foundation: the influence of conservative evangelicals in the United States. This influence in my life came decades before I knew that there was in Brazil an astrologer called Olavo de Carvalho.

Thank God, I did not allow myself to be duped and degradated by Carvalho’s Guenian traditionalism. I did not become one of the many mentally sick individuals that his cult has been producing. 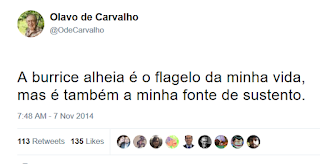 “The stupidity of others is the scourge of my life, but it is also my source of sustenance.”

If the Brazilian right is filled of donkeys and mentally sick people, as Carvalho has accused, it’s all his fault, because he’s been exploiting them for years to fill his pockets. Translating Carvalho’s bifurcated statement: “The stupidity of Catholics and evangelicals is the scourge of my life, because not all Catholics accept my supreme wisdom and most evangelicals distrust the occult nature of my knowledge, but those who come to me become my source of livelihood.”

Even so, he has managed to dupe many Catholics and some evangelicals, who have paid monthly fees to get duped and spiritually degradated through the course his bifurcated smooth talk sells as pure “philosophy.”

It is not the first time in the history that philosophy is a powerful channel to deceive. Carvalho, Dugin and Guénon are not the first or the last to use philosophy to confuse, disorient and misinform with the false appearance and propaganda of guiding and informing. The Bible is very clear in its warning that philosophy has incantations and seductions, which Christians need to avoid:

“See to it that no one takes you captive through hollow and deceptive philosophy, which depends on human tradition and the basic principles of this world rather than on Christ.” (Colossians 2:8 NIV)

“Make sure no predator makes you his prey through some misleading philosophy and empty deception based on traditions fabricated by mere mortals. These are sourced in the elementary principles originating in this world and not in the Anointed One (so don’t let their talks capture you).” (Colossians 2:8 The Voice Bible)

If you put the Bible and its Author above all else, you will have the Truth. If you put philosophy above the Bible, you will be an easy prey to sophisticatedly false and lying philosophers, charlatans and bifurcated-tongued right-wingers.

← Clash of Powers: We Are Now in a Second Civil War in America
Hezbollah Operating Within The U.S. →