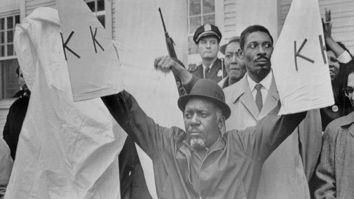 While so many gun control advocates  want to make the debate over our 2nd Amendment a racial issue, a look back at our nation’s history can be a real eye opener.  Many gun bans in the U.S. were instituted specifically to disarm freed slaves.

True American Heros, the Deacons for Defense and Justice were the armed black men of the Civil Rights Movement from 1964 to 1966.

During the 50’s and 60’s civil rights supporters were terrorized and murdered by groups such as  the Democrat controlled Ku Klux Klan. Adding to the danger was the unspoken cooperation that sometimes existed between these groups and local police.   Many civil rights workers armed themselves for self-protection. During the 1950s the home of Dr. Martin Luther King, Jr. had so many guns that one visitor called it an “arsenal.”

In 1964, after local police in Jonesboro, Louisiana  led a Klan motorcade through black neighborhoods, about 20 black Army veterans founded a community defense patrol and adopted the name of “Deacons for Defense and Justice” because many of them were practicing Christians and aimed to serve their community in a Christian manner. The Deacons conducted night patrols of black neighborhoods, working with CORE, the Congress of Racial Equality, formed in 1942.

In 1965 another chapter of the Deacons was formed in Bogalusa, Louisiana, and in the same year the Deacons formally incorporated as a non-profit organization with a stated purpose of “the defense of civil rights, property rights and personal rights. . .and to defend said rights by any and all honorable and legal means to the end that justice may be obtained.”

The Deacons were effective in providing protection for blacks who sought to register to vote and for white and black civil rights workers in the area.  For example, they provided security for the 1966 March Against Fear from Memphis to Jackson, Mississippi.  Moreover their presence in Southeastern Louisiana meant that the Klan would no longer be able to intimidate and terrorize local black citizens without challenge.

Black dignity, the responsible protection of family and community was a core value of the Deacons and for that reason,Black nationalists and white communists were never able to recruit the Deacons to their cause.  According to former member, Charles Sims, “I don’t want to live under Black Power, I don’t want to live under white power.  I want equal power, and that’s what I push.”

In February of 2015 the Library of Congress released the Rosa Parks Collection to researchers.  Among the 7,500 manuscripts was a short autobiography detailing Parks early experiences with armed self-defense.  She wrote how her grandfather used a shotgun to protect the family home in Pine Level, Alabama, from potential attack by the KKK.  According to Parks, her grandfather would stay up to wait for the Klansman to come to the house and kept his shotgun within hand reach at all times.

The Deacons for Defense and Justice were true American heroes. They exemplified the ideal of Second Amendment citizenship. The NRA was their arsenal of democracy. Under the most perilous circumstances, the Deacons chose to Stand and Fight for civil rights.

← What Does The World Expect Trump To Do?
The Laughable and Lamentable Loony Left →