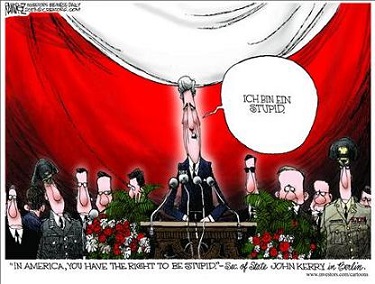 While discussing freedom of speech and freedom of religion with a group of German students in 2013, our then Secretary of State John Kerry insinuated  that America’s First Amendment allowed our country to be stupid.  Can’t imagine why that struck many Americans the wrong way!

As a left-wing icon, Kerry’s views, while maybe uttered without thought,  should not really surprise anyone. Karl Marx brilliantly went to the heart of the matter when he described  religion as the “sigh of the oppressed creature, the heart of a heartless world,  the spirit of nonspiritual conditions”.

Marx pointed out that religion is but  an escape from the misery of the world and a protest against its wretchedness and is of no consequences to government.  He predicted that  religion would decline primarily due to the advance of “social  development, in which education (indoctrination) would  play a great role” under the management of Socialism.  Socialist oppose what they refer to as the ‘reactionary views’ of religious leaders and groups to their goal of  a socialist society that  transform people’s lives under a socialist planned world.

Kerry’s comments were even more troubling when you consider that as Secretary of State of the world’s most free nation, that the majority of world doesn’t share in our freedom of speech or freedom of religion, or may never have that right to criticize their government or enjoy the First Amendment liberties we celebrate.

Tonyia Martin at Christianity Today wrote that “The right to be “stupid” and the right to speak out and to worship freely are clearly very different to someone longing after the latter.  There is a reason American soldiers are willing to die for our freedom.  Americans stand behind these freedoms as rights from God, to worship him and be called his people. Christians in the U.S. should be paying very close attention to religious freedom in our own country and in places where it’s not as easy to affiliate with Christ.

Religious freedom obviously allows for open evangelism and a freer expression of our beliefs, but it also lets us live as God created us to be. He made us with the freedom to choose our faith, to know him through a relationship, not because we were forced into one religion or another. It’s not stupid to speak out and live in a just society; to worship who we chose; to pray, without fear, arrest, harassment, abuse, or intimidation. It’s freeing and God-glorifying.

Christians who continue to face persecution around the world often look to American Christians to continue to uphold religious freedom and set a standard. Coptic Christians in Egypt have said  that one of their greatest fears is that someday America will no longer be a place where Christians can express and live out their faith as freely as we can now. If that ever happens, they expect persecution to worsen worldwide.

We have to uphold these rights not only for ourselves, but also as a symbol and sign of justice to Christians around the world. Our freedoms are their hope.

If we allow the far left, the socialist progressives of today, to kill these freedoms our country has known for generations, then we are as stupid as the far left think we are.

People who are fearful of things that they cannot control, cannot believe that society will function without control, preferably theirs!  A major element driving dictatorships has been the fear of lack of control and ‘order’.  Free  societies  have always  outperformed the various socialist governments.   But,  what is very striking, when studying the various socialist hell on earth of the last century, is the ‘religious’ certainty among  Socialist  that they had achieved some major social advance and vast intellectual breakthrough.

“It is not from the benevolence of the butcher, the brewer, or the baker, that we expect our dinner, but from their regard to their own interest”  Adam Smith

← Killer Side Effects of Trans Treatments: The Deadly Truth
A Voice for Freedom from an Unexpected Place →