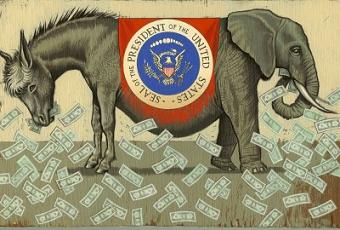 “The American Republic will endure until the day Congress discovers that it can bribe the public with the public’s money.” Alexis de Tocqueville

It wasn’t long after the founding of our Republic before the wolves were baying at the door. They were held in abeyance for a large part of our nation’s history but, as America became wealthier and Fabian socialist wormed their way into every aspect of our government, the ruling powers created what John Stuart Mill described as an invitation to every man “to plunge his hand into his neighbor’s pocket.”

The ruling power’s appetite for deference, power, and perks is never-ending. While they view themselves as the best and brightest, they wear on their sleeve the view that the rest of us are racist, retrograde, greedy, dysfunctional, unless property constrained, and above all STUPID, something that I occasionally agree with.

The left’s agenda is power for itself and they hold that power through means of patronage, promises, bribes, and threats.  Like good Marxists everywhere their approach to any and all matters is to grow the power of government.

By taxing and parceling out more than a third of what Americans produce, through regulations that reach deep into American life, they make themselves the arbiter of wealth and poverty.

Beyond patronage, picking economic winners and losers, the left redirects the people’s energies to tasks that the political class deems more worthy than what Americans choose for themselves. They preach that left to ourselves we would squander the world’s resources.  Our cars are too big, we eat unhealthy, we can’t manage our healthcare without government interference but worse, as free born people, we actually have the audacity to spend our hard earned money on things we want even though social justice demands we eat less, drive electric cars, live in smaller houses closer to work, accept medical rationing, lockdowns, mask mandates and perhaps even mandatory vaccinations while giving more and more of our money to the government to support an ever larger nanny state.

The America once described in civic books, in which no one could be convicted or fined except by a jury of his peers began disappearing with the passage of FDR’s ‘New Deal,’ that inaugurated today’s administrative state in which bureaucrats write, enforce, and adjudicate nearly all the rules and regulations. Today’s legal administrative texts are incomprehensibly detailed and freighted with provisions crafted exquisitely to affect equal individuals unequally.

They are also ever more keen on reforming what constitutes traditional families while showing contempt for religious freedoms. Christians, patriots, and conservatives are good for only a punch line.  Families of faith,  rooted in the ignorance commonly called religion, not only teach divisive social prejudices, and repressive gender roles, but are the greatest barrier to human progress.  Just ask the U.S. military leaders who now refer to us as domestic terrorists.

The left believes that all judgments are subjective, and ordinary people can no more be trusted with reason than they can with guns.  Because the peasants will pervert reason with ideology or religion, science is science only in the hands of the enlightened ones.  Consensus among the elite is the only standard of truth. Facts and logic matter only insofar as proper authority acknowledges them.

Thus do they go about disaggregating and dispiriting the ruled.

“Geese are but geese, tho’ we may think’m swans, and truth will be truth tho’ it sometimes proves mortifying and distasteful.” Benjamin Franklin

Source: America’s Ruling Class And the Perils of Revolution, by Angelo M. Codevilla, The Spectator

← Who Died and Made the Supreme Court God?
Rejected That We (All of Us) Might Be Accepted →