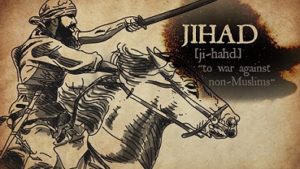 At a time when we are told that Muslims are only a misunderstood minority who work diligently to share their values with countries that they overrun, it is heartwarming to find someone that has contact with reality. In Raymond Ibrahim’s book, Sword and Scimitar, the  history of fourteen centuries of war between Islam and the West is laid bare.

Throughout history Muslims had a particular hatred of Christians, seeing their belief in Christ’s divinity to be a great sin against their god – allah so wherever their armies went they desecrated and destroyed churches, broke crosses and statues, and made a particular point of violating and slaughtering Christians.

The Muslim wars of imperialist conquest have existed for almost 1,500 years against hundreds of nations, over millions of square miles, stretching from southern France to the Philippines, from Austria to Nigeria, and from central Asia to New Guinea, justified by the words and deeds of Muhammad.  They didn’t look upon their conquests as simply local affairs, but as stepping stones to subjugating the earth. When, in 1786, Thomas Jefferson and John Adams inquired of Tripoli’s ambassador to Britain why the Barbary States preyed on American shipping, they were informed that according to the laws of their prophet, Muslims had a “right and duty” to make war on all nations that did not acknowledge their authority.

Between 1530 and 1780, the Barbary Coast Muslims enslaved at least a million Europeans. Some three million Slavs/Poles, Lithuanians, Russians, and Ukrainians were enslaved between 1450 and 1783. Millions more were taken captive by the Muslim conquerors of Spain. One caliph, Abd al-Rahman III, had 3,750 slaves and 6,300 concubines.

Slaving raids were also carried out in Ireland, England, Denmark, and Africa, and as far away as Iceland and Scandinavia. Slaves were used for labor, as soldiers, and as concubines. White slaves were highly prized, especially blonde and red-headed girls and women. Black slaves were routinely castrated. Although few Americans are aware of the fact, the Arab and Ottoman slave trade lasted far longer than the Atlantic slave trade and resulted in the loss of many more lives.

Even America did not escape the reach of Islamic jihad. In its formative years America was forced to make jizya payments, amounting to 16 percent of the federal budget, to Algeria for the release of captured American sailors. Indeed, America’s first war as a nation was a war against Islam. Over a period of thirty-two years, the American navy fought an intermittent war to put an end to the Barbary States’ attacks on American shipping. That is what is referred to by the “shores of Tripoli” in the Marine Corps hymn.

The modern idea that the crusades were unprovoked wars of conquest is demonstrably false.  As Ibrahim points out, the crusades were a very belated response to 400 years of Muslim conquest.  Two-thirds of the Christian world had already been devoured by Muslim armies before Pope Urban II made his appeal to the knights of Christendom.  Many regions which are now solidly Muslim were once Christian.  All of the twenty-two nations which now comprise the Arab world in the Middle East and North Africa were Christian.  The same is true of Turkey whose capital Constantinople was once the center of Christendom.

Perhaps the major lesson we should learn from Ibrahim’s book is that little has changed over the centuries. The biggest lie pushed by the left is that al-Qaeda, ISIS, Boko Haram, and other major terrorist groups have hijacked and perverted the true message of Islam. History says otherwise. “Muslim hostility to the West,” Ibrahim observes, “is not an aberration but a continuation of Islamic history.” Wishful thinking about Islam’s peaceful intentions does not change the reality that Muslims are now doing what they have done to and in the West for centuries.

Indifference is a weakness that Muslims prey on. As Pope Sixtus IV, 1471 to 1484, warned European rulers: “Let them not think that they are protected against invasion, those who are at a distance from the theatre of war! They, too, will bow the neck beneath the yoke…unless they come forward to meet the invader.”

Even though the distance between peoples as, measured by days and weeks, has shrunk drastically, many in the West today still maintain an attitude of indifference toward the threat from Islam. They think that the persecution of Christians in the Middle East and Africa can’t happen to them. And many in America are unaware of the accelerating Islamization of Europe.  America must wake up before it is too late.

← False Teachers Will Arise Among You
Killing Babies, Killing Freedom →