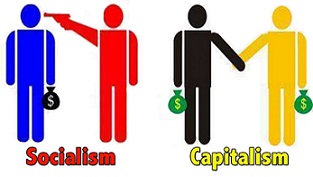 With the failure of Bernie Sanders to secure the Democratic presidential candidacy, Americans can breathe a sigh of relief – or can they?  The American economic system is failing and that failure is being attributed by many on the left (and some on the right) as a failure of capitalism. It was this false notion that gave rise to Sanders and his gospel of social democracy.

Sadly America is no longer a true capitalist nation – We live under what is more properly called a mixed economy, an economic system that permits private property but only at the discretion of government planners. We’re a little bit capitalism and a lot of socialism.

Our current system and its paid politicians still repeat high-sounding terms like “freedom of the individual” and “free enterprise,” but they are placebos, cruel deceptions meant only to sedate the angry voter. The fact is we have massive regulation and regimentation for the “common good” and in the “public interest,” left-wing code words that mean police state and reduced liberty. We live in a fiction of freedom perpetuated with semantic corruption that evolved into economic fascism.

There is a silent marriage between big government and big business that exists, not only in America but around the world. All governments are fronts for monopoly capitalism, and monopoly capitalism has many names: fascism, socialism, communism and even democracy. They are all immoral systems that use the power of government to exist and to suppress human freedom.

Throughout history there have been two basic forms of social organizations – collectivism and individualism. During the twentieth century collectivism took many forms: socialism, fascism, Nazism, welfare-statism and communism are its more notable variations. The only social system commensurate with individualism is laissez-faire capitalism, the system in which transactions between private parties are free from government  interference.  It was American free market capitalism that fueled the growth of the U.S. economic engine and raised the standard of living around the globe, before monopoly capitalism began to exert greater control in the mid 1800s and accelerated with the creation of the Federal Reserve in 1913.

Touted by the left as a means of social justice, of morality, despite its dismal record of failure in the real world, Socialism is the social system which institutionalizes envy and self-sacrifice. It is the social system which uses compulsion and the organized violence of the State to expropriate wealth from the producer class for distribution to the parasitical class. Under socialism a ruling class of intellectuals, bureaucrats and social planners decide what people want or what is good for society as a whole and then use the coercive power of the State to regulate, tax, and redistribute the wealth of those who work for a living.  It is a form of legalized theft where one person’s gain is another’s loss.

Capitalism, on the other hand,  requires human beings to deal with one another as free moral agents trading and selling goods and services on the basis of mutual consent. It is the only just system because the sole criterion that determines the value of a thing exchanged is the free, voluntary, universal judgment of the consumer. Coercion and fraud are anathema to the free market.  It is both moral and just because the degree to which man rises or falls is determined by the degree to which he uses his mind and brawn. It is the only system that rewards merit, ability and achievement, regardless of one’s birth or station in life. Of course there are winners and losers. Winners are those who are honest, industrious, thoughtful, prudent, frugal, responsible, disciplined and efficient. The losers are those who are shiftless, lazy, imprudent, extravagant, negligent, impractical and inefficient.

Unfortunately the return of capitalism in its true sense will not happen until there is a moral revolution. We must rediscover and then teach our children the virtues associated with being free and independent citizens. Only then will there be true social justice in America.

Source: You can read Bob Livingston’s Socialism Is An Immoral System in full at this link.

← Crushing the Truth with Social Trends
Perversion and Immorality vs. Trump’s MAGA →

2 comments for “American Is No longer A True Capitalist Nation”