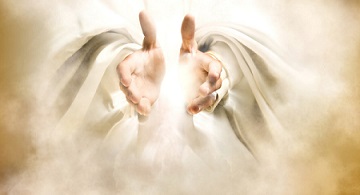 The title LORD, capital L O R D, is displayed almost 7000 times in the Old Testament. There are hundreds of verses that bare witness to the Praise, Honor, and Glory due His Name. There are scores of verses that instruct us to lift us His Name and to Publish it and to Declare it throughout the earth. There is even a special promise made to those that fear the LORD and meditate upon the meaning of HIS name. So what is His name?  In the Hebrew His name is YHVH.

You don’t have to be a Hebrew language scholar, or a Rabbi, or a man of letters to see the message hidden in plain sight in the four letters YHVH. His name was deliberately written so that a small child could see it and at the precise moment in time the Seeing becomes Understanding.

The first letter in the Sacred name of YHVH is Yood, the tenth letter in the ancient Hebrew alphabet, pictured as a hand. It is a hand that is accomplishing a mighty deed, a divine work.

The second letter in the Sacred name of YHVH is Hey, the fifth letter in the ancient Hebrew alphabet, pictured as a Man lifting up His Hands to the heavens. Hey means to Reveal, to Behold or to Look. The letter Hey is often used to indicate the presence and work of the Holy Spirit

The third letter in the Sacred name of YHVH is Vav, the sixth letter in the ancient Hebrew alphabet , pictured as a wooden peg or hook, most commonly pictured as an Iron Nail. Vav means to Secure or to Add. It is used to picture securing one thing to another.

The fourth letter in the Sacred name of YHVH is Hey, the second time the letter Hey is used in the Sacred name.  The meaning of Hey can also include both doing the Revealing or it can indicate Receiving Revelation. As state above the letter Hey is often used to indicate the presence and work of the Holy Spirit in which case, it indicated the illuminating, revealing and disclosing work of the Holy Spirit.

The clearest Pictorial translation of YHVH, the Sacred Name of God is: Behold the Hand! Behold the Nail!

Yood is the number 10, which is one of four sacred numbers in Scripture, meaning ORDINAL PERFECTION, a Divinely Appointed Sequence of events that unfolds at exactly the right TIME. It is a prophetic alert that there is going to be a sequence of events ordained by the Heavenly Father that will conclude in a divine work.

Hey, the number 5, is the number of Redemption, and can also mean Grace or Unmerited Favor.

Hey, the number 5, as shown above.

When you put the numbers together you receive another message from our Heavenly Father:  After a sequence of events at exactly the right Divinely Appointed Time, God will show grace and favor to fallen mankind, a manifestation of His Divine Grace.

YHVH – Look for the Hand and the Nail and when you see it then Salvation has come to Israel and the entire world.

YHVH – At the Divinely Appointed time Salvation has come to mankind.

YHVH – A Saving Grace has been freely given to all men who look upon and Behold the Hand and the Nail with eyes of faith, and trusting hearts. YHVH is our Salvation and Yeshua is His Name.

Source: YHVH, The Name of the Lord, Livingwordin3d.com; Biblical Mathematics, Keys to Scripture Numerics, The Significance of Scripture Numbers as Revealed in the Word of God,  by Ed. F. Vallowe, 1995

← The Need to Control
PC Poison in the Pot →