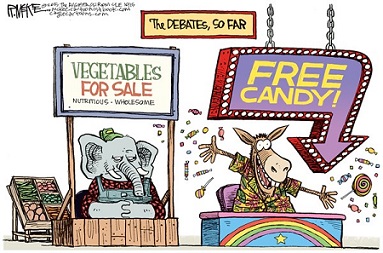 The modern welfare state’s tentacles of paternalistic control reach into every corner of personal and social life. It has made us all “children of the state,” and weakened our desire and appreciation for self-responsibility.

The modern welfare state had its birthplace in Imperial Germany under Chancellor Otto von Bismarck. In the 1870s the Social Democratic Party gained increasing support from the voters in elections to the Reichstag (parliament). Fearful that the socialists might win a majority, Kaiser Wilhelm and the conservative parties resolved to end the challenge to their power by agreeing to bribe the working class with national health insurance, a pension, a minimum wage, workplace regulation, vacation and unemployment insurance. By 1915, the German government had its finger on the pulse of the worker from the cradle to the grave.

Under the German welfare system, with their extensive controls and regulations, the working class existed only for the state. There was no limit on the government’s control or power. In his book “Socialized Germany” Frederic Howe explained that “in this new world there was no place for universal and enduring principles concerning the individual’s rights to life, liberty, and property, or for constitutions to prevent governments from encroaching on freedom. Every policy issue was to be guided by the pragmatic interests of the day.”

In the late 19th Century there were few American universities that offered doctoral degrees so hundreds of young American economists, political scientists, historians, sociologists, and philosophers made the pilgrimage to Germany, many of which studied with the leading members of the German Historical School who were advocates of state socialism. It was these Americans who returned home with ideas about the paternalistic state who became the leaders of the movement for social reform during what is known as the Progressive Era in the early 20th Century.

One such American was Richard Ely, a professor of economics at the University of Wisconsin, who, believing himself to be on a mission from God, co-founded the American Economic Association to advance the welfare-state agenda. In 1895 Ely expressed his vision of an American Socialistic society in which “men shall work together for the common purposes, and in which the wholesale cooperation shall take place largely through the government,… managed by agents who appreciate the glory of true public service, and feel that it is God’s work they are doing, because church and state are as one.” This was the welfare statist’s alternative to both Marxian socialism and classical liberalism.

While not as visually dramatic as the damage done in Eastern Europe, the harm wrought by the welfare state has nonetheless been destructive of our political, economic, and cultural life. It has been and is eating at us from the inside. And to a great extent its success has been due to the fact that, after several generations, people do not even know it for what it is. The welfare state, for many, is a “just” and “caring” society. It is the “American way.” To the contrary, the welfare state in American was created with a goal of destroying the free market economy.

Today Bismarck is even praised as a visionary on the official U.S. Social Security Administration’s website which reads: “Despite his impeccable right-wing credentials (?), Bismarck would be called a socialist for introducing these programs, as would President Roosevelt 70 years later. In his own speech to the Reichstag during the 1881 debates, Bismarck would reply: “Call it socialism or whatever you like. It is the same to me.”

Bismarck has become a patron saint for the intellectual left. Whole generations of Americans have been indoctrinated into the idea that FDR, modeling his welfare system on Bismarck’s bribe, saved America from economic doom and Obama saved us once again by completing the project. State interventionism is now presented as a main reason for individual success and thus with a claim over individual property. The enemy now is “inequality” and “the one percent.”

A change in the meaning of social allegiance is breaking the bonds of solidarity that once existed in local communities and shifted solidarity toward larger social structures, with all roads leading to a collapse of society within the affairs and institutions of the state. Instead of the intimate bonds of family, friends, and neighbors, we now have an overarching larger “community” where bonds are more detached. Civil rights, under such construct, has given way to political rights, which in turn lay the ground for the social rights of the welfare state. We are told to accept it, get in line, and get over it.

Social Justice has become the gathering theme to circle the wagons around an ever-expanding welfare state. The self-preservation instinct of political aspirants now responds to the voter’s demand for more government intervention. Income transfers coated with the rhetoric of fairness and solidarity are always popular with those who are at the receiving end and politicians know it.  The good old “us against them” attitude is alive and well.

The trade-off of freedom for security will eventually destroys the whole of the social fabric of our nation because it is not real social solidarity; it simply masquerades as such.

Source: Marching to Bismarck’s Drummer: The Origins of the Modern Welfare State, The foundation for Economic Education, by Richard M. Ebeling; Bismarck and The Welfare State by Ismael Hernandez ~ President, Freedom & Virtue Institute