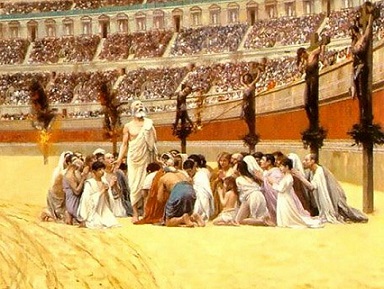 “But the natural man receiveth not the things of the Spirit of God: for they are foolishness unto him: neither can he know them, because they are spiritually discerned.” I Cor. 2:14

In “The Myth of Persecution: How Early Christians Invented a Story of Martyrdom” Candida Moss, a ‘practicing’ Catholic and professor of early Christianity at Notre Dame, claims that the early church exaggerated, invented, and forged stories of Christian martyrs, stories that were passed along by Jewish and Greek writers or forgeries designed to marginalize heretics, inspire the faithful and fund early churches. Moss says these fairy tales are a dangerous legacy of a martyrdom complex still employed today to silence dissent and galvanize a new generation of culture warriors.  Christians, she writes, need to abandon the conspiratorial assumption that the world is out to get us and embrace the consolation moral instruction and spiritual guidance that these martyrdom stories provide.

Early Christians, she writes were basically responsible for their own death because they were rude, subversive and disrespectful toward the Roman empire.  They refused to follow Roman laws such as offering public sacrifice to pagan gods which she feels was nothing more than asking for a “pledge of allegiance.”

She was willing to admit that some Christians were executed in horrible ways under conditions we’d consider grotesquely unjust. But it’s important, Moss explains, to distinguish between “persecution” and “prosecution.” The Romans had no desire to support a prison population, so capital punishment was common for many seemingly minor offenses; you could be sentenced to be beaten to death for writing a slanderous song. Moss distinguishes between those cases in which Christians were prosecuted simply for being Christians and those in which they were condemned for engaging in what the Romans considered subversive or treasonous activity. Given the “everyday ideals and social structures” the Romans regarded as essential to the empire, such transgressions might include publicly denying the divine status of the emperor, rejecting military service or refusing to accept the authority of a court. In one of her most fascinating chapters, Moss tries to explain how baffling and annoying the Romans (for whom “pacifism didn’t exist as a concept”) found the Christians — when the Romans thought about them at all.

In an article at the Huffington Post, Moss further elaborates that: “Archeological evidence reveals that on those occasions when Christians did die en masse it was the result of general legislation intended to defend and fortify the [Roman] empire.  She was willing to admit that Christians around the world endure violence and oppression today but, once again, those experiences are overshadowed by complaints that conflate disputes over lawmaking with persecution. If persecution language is not reserved for situations of actual persecution, then unspeakable violence becomes indescribable. Disagreement becomes martyrdom and martyrdom becomes disagreement.”

In response, Donald McClarey writes in his article, The Myth of Candida Moss, that the book is a political tract disguised as a work of history. It isn’t really about history, which Ms. Moss mangles, but is rather aimed at current political battles, i.e. ObamaCare and forcing Christian organizations to support abortion, sterilizations, etc. The book actually displays her contempt toward the immutable holy nature of God.

It should come as no surprise that to the left mindset in order to get along Christians must toe the line with any liberal agenda that happens to be flavor of the month even though it is in direct violation of our faith. They would like nothing more than for Christians to retreat to the closet.

The only “absolute truth” that the left seem to believe is that bible believing Christians are the purveyors of the worst plague of destruction the universe has ever encountered.

“God offers to every mind its choice between truth and repose. Take which you please – you can never have both” Ralph Waldo Emerson