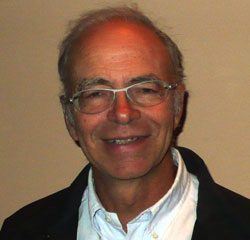 Peter Singer, a bioethicists, believes he is too humane to eat a hamburger because animals should have rights, yet has no qualms about murdering children before and after birth.

Singer believes that an unborn child only acquires “moral significance” at around 20 weeks gestation when they are able to feel pain  however, even though they can feel pain, the child still doesn’t have the self-awareness of a chimpanzee or even a dog and we should assign no greater moral significance because it is human.

“Some opponents of abortion respond that the fetus, unlike the dog or chimpanzee, is made in the image of God, or has an immortal soul.  They thereby acknowledge religion is the driving force behind their opposition.  But there is no evidence for these religious claims and in a society in which we keep the state and religion separate, we should not use them as a basis for the criminal law, which applies to people with different religious beliefs, or to those with none at all.”

All laws stem from someone’s perception of morality so why should Singer or those like him be able to impose their perception of morality, or lack thereof, on the rest of society?   The truth is that most of the atrocities of the 20th century were committed under atheistic regimes so it would seem reasonable that religious morality was a good thing for society at large.

Singer  also admits that even though an unborn child is fully human, the humanity of that child does not obligate society to preserve that life.  In his book “Rethinking Life and Death”,  Singer takes the view that new-born infants, especially if they are unwanted, are not yet fully members of the moral community therefore it is reasonable to extend a 28 day period after birth in which that child can be slaughtered before we grant them full human rights.

In 2007 Singer wrote an article reversing his position on the acceptance of infanticide in most cases but made it clear that it wasn’t because a child acquired a moral significance once it was born but because criminal law needed clear dividing lines.  But in another article he argued that due to the high rate of disability in premature infants, doctors should not treat them if they were born prior to 26 weeks gestation because “killing a disabled child is not morally equivalent to killing a person.  Very often, it is not wrong at all.”   Singer’s denial of an unborn child’s personhood is central to his justification for abortion.

His views stem primarily from a philosophy known as utilitarianism in which the stated goal is to maximize pleasure and minimize pain for the greatest number of people as possible.  Utilitarian ethics were popularized by Joseph Fletcher, an apostate Episcopalian minister, who is best known for creating “situation ethics” and popularizing the distinction between ‘human being’ and ‘person’ that is central to abortionist ethics.   It is kind of like Clinton’s question – “what is the definition of is”?

A clear strength of Utilitarianism when discussing abortion is that there is no absolute value placed on human life, meaning it avoids moral questions about when human life begins. Act Utilitarianism is particularly useful, as it prefers to judge each individual case on its own merits, meaning abortion would be very much up to the mother,

Situation ethics is explained by Christian apologist and attorney John W. Montgomery who wrote that whether we followed a moral principle should depend upon the situation.  “Lying could be more Christian than telling the truth. . .stealing could be better than respecting private property. . .no action is good or right of itself.  It depends on whether it hurts or helps people. . .There are no normative moral principles whatsoever which are intrinsically valid or universally obliging.  We may not absolutize the norms of human conduct. . .Love is the highest good and the first order value, the primary consideration to which in every act. . .we should be prepared to sidetrack or subordinate other value considerations of right and wrong.”

Tom Beauchamp, also a bioethicists and professor of Philosophy, who received his BA from Southern Methodist University and his BD from Yale Divinity School, is of the same mind.  He wrote that “Many humans lack properties of personhood or are less than full persons – they are thereby rendered equal or inferior in moral standing to some nonhumans.”  Let’s hope that this is not the philosophy of Yale Divinity because it is antithetical to the Biblical teaching of God’s creation of man.

American University philosophy professor Jeffrey Reiman has also asserted that unlike mature human beings, infants do not “possess in their own right a property that makes it wrong to kill them.” He explicitly holds that infants are not persons with a right to life and that “there will be permissible exceptions to the rule against killing infants that will not apply to the rule against killing adults and children.

Euthanasia advocate Dan Brock, of Harvard’s Program of Ethics and Health argues that regardless of the right or wrong in taking the life of a child, “in a pluralistic society like our own, with a strong commitment to freedom of religion, public policy should not be grounded in religious beliefs which many in society reject.”

According to Singer,  “When we reject belief in a god we must give up the idea that life on this planet has some preordained meaning. Life as a whole has no meaning. Life began [in] a chance combination of molecules; it then evolved through chance mutations and natural selection. All this just happened; it did not happen for any overall purpose.”

That single statement precludes Singer from making any moral claims, as it absolutely precludes there being such a thing as morality. In a purely mechanistic universe, there can be no right and wrong, only what we prefer. Objective, universally binding morals cannot exist without an objective, moral lawgiver.

I find it vastly disturbing that, in a country where people go nuts over someone trying to drown a puppy,  they could care so little about the murder of  an innocent unborn child!