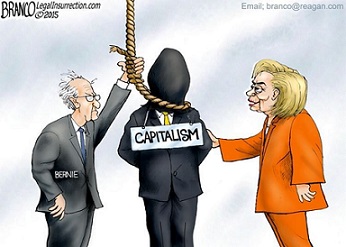 I have said for 20 years that the next American Revolution or Civil War will be started by the Left. Today, more than ever, that belief has solidified. The Bolsheviks are inside the gate and the objective is the death of capitalism.

We are polarized – we are factionalized. Our history has been rewritten to minimize the importance of our Judeo-Christian foundation. Our institutions have been purged of morality that comes from that foundation. Our language is adulterated with vulgarities. Our youth have been hijacked by powers that not only have redefined traditional family but stripped them of any faith based morality, while indoctrinating them with a collectivist philosophy that is not only indicative of Karl-Marx but of the radical wing of the Democratic Party, which pretty much covers the entire party today.

While the revolution has been smoldering for decades, the violence only became mainstream in 2012 with the emergence of Occupy Wall Streeter (OWS) where protestors were chanting for the death of capitalism. Heck, they were chanting for the deaths of CEO’s, cops, and tea partiers, with some of them advocating the return of the guillotine. By 2014 this movement was transferred to another radical group, Black Lives Matter, founded by Marxist revolutionaries, Alicia Garza, Patrisse Cullors, and Opal Tometi who share a Marxist ideology and work for front groups of the Freedom Road Socialist Organization (FRSO), a self-proclaimed Marxist/Leninist revolutionary group. By 2015 this Marxist ideology had found its way into college classrooms demanding social justice and tolerance while stifling freedom of speech and open debate. History may well record that the First Amendment died on American college campuses.

You need to understand that no matter how much they use the race card to justify their violence – it is not about race. It is pure ideology for without a victim class, real or perceived, revolutions can’t get off the ground, and if victims cannot be found, they will be produced.

While reminiscent of the ‘60s and 7os radical revolutionary movement, this is far more dangerous in that these radicals have been allowed to infiltrate every institution and are now in the chief seats of power; more dangerous in that the stability of society has been successfully fragmented due to multiculturalism and collectivism, fostered by unchecked immigration policies.

Collectivism has existed in varying degrees around the world in political movements like socialism, communism, and fascism. In its milder form, it opposes capitalism, seeks to redistribute wealth, and limit private property rights through government regulation, and censor the free flow of ideas, with a goal of total equality. Yet, for all the rhetoric of social justice, in reality everyone becomes equally poor – except the ruling elite.

While it may be difficult for everyone to agree on the definition of social justice, it is basically an ideology that demands resource equity, fairness, and diversity, as well as the eradication of existing forms of “social oppression,” through the forced redistribution of resources and decision making. But what is equitable and fair is often not to give people the same portions, but rather to give what is proportionate to the efforts of each.

Unlike Socialism, Marxism, Communism or Fascism, America was founded on documents designed to protect the individual rights from the state. We were not designed as a democracy where mobs rule but as a Constitutional Republic, governed by laws instituted by the people and the representatives of their choosing. The success of the nation is dependent upon the liberty of the individual and when that individual is allowed to prosper and flourish, the community as a whole prospers.

Of course the argument could easily be made that “Godless Capitalism” is evil but, I would remind you that Godless anything is evil, including government, politicians, education, finance, and the media. But the striking thing here is this: Those who are decrying the evils of “Godless Capitalism” are of the very persuasion that ejected God from our institutions! Was it not Saul Alinsky who wrote on the dedication page of Rules for Radicals an appreciation for Lucifer “the first radical known to man who rebelled against the establishment and did it so effectively that he at least won his own kingdom.”

The revolution did not begin with Obama although he did legitimatize it. Where just a few short months prior to the election, Obama and his left-wing conspirators were viewed by the media and the ranks of the revolutionaries as an ally, the 2016 election gave the “useful idiots” a new target in the form of Donald Trump and his supporters.

As Alinsky said, “The issue is never the issue; the issue is always the Revolution“. There is blood in the water, and the feeding frenzy is in full swing.

You can read the article, The Revolution has Begun by Defining the Narrative, in full at the link provided.