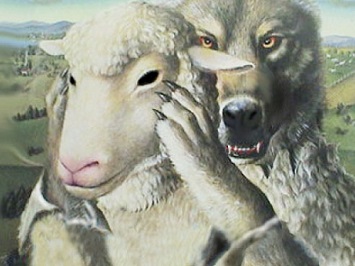 “And many false prophets shall rise and shall deceive many. And because iniquity shall abound, the love of many shall wax cold. But he that shall endure unto the end, the same shall be saved.” Matthew 24:11-13

A perfect example of the false doctrines taught today can be seen in Bishop Carlton Pearson, a fourth-generation Pentecostal preacher who now considers himself to be a prophet. The former leader of Higher Dimensions Family Church in Tulsa, Oklahoma, lost his position in 2000 when he was labeled a heretic for his book, The Gospel of Inclusion. His second book God Is Not A Christian, A Jew, Muslim, Hindu, is a continuation of his Gospel of Universalism.

According to Pearson’s ‘revelation’, Jesus redeemed the entire world by his death on the cross. He did not die for Christians, He died to redeem, reconcile and ultimately save the cosmos. He writes that Jesus was not a Christian – He was a Jew whereas God, he writes, is a spirit and cannot be confined exclusively to any particular religion. He loves everybody, He understands everybody, and He has a covenant with everybody-again, whether they know it or not. In essence – Pearson says you don’t have to do anything or believe anything to be saved.  “To believe that God could or would permit a single soul…to be destroyed, or eternally separated from Him is a contradiction in terms – it would be an inadmissible defeat for God. If the atonement means the reconciliation of God and man or man to God then it must end in universal salvation….”

Universalism, as a religious doctrine, was declared heresy by the Council of Constantinople in A.D. 543. It became popular again in the 19th century and is gaining traction in many Christian circles today. It soft pedals, reinterprets, and denies the basic teachings of salvation.  And, like the false teaching of the Rapture, it makes Christians complacent about their own eternal destiny. Why should they bother to study the Bible or ask for forgiveness for their sins if they are going to heaven anyway?

Robert Schuller, former leader of the Reformed Church in America which Time Magazine identified as the “denomination of Norman Vincent Peale and Robert Schuller,” resigned as Pastor of the Crystal Cathedral in 2011. The Cathedral found itself in bankruptcy and was eventually purchased by the Catholic Diocese of Orange Co., California.

Schuller defined sin as “any act or thought that robs you of your self-esteem.” In his book, Self Esteem: The New Reformation, he wrote that the “single deepest need in human existence is self-respect, self-esteem, honor and glory in personhood.” Hell, he wrote is the “loss of pride that naturally follows separation from God, the ultimate and unfailing source of our soul’s sense of self-respect. A person is in hell when he has lost his self-esteem.”

Solidifying that his self-esteem gospel is nothing more than the worship of self, Schuller wrote his version of the Lord’s Prayer,:  “Our Father in heaven, hallowed by your name declares that we are premium persons, not peasants or pawns; for we are children of God. We are members of the royal family. When we are adopted as the children of God, he said, the core of our life changes from shame to self-esteem. And we can pray ‘Our Father in heaven, honorable is our name’. So the foundation is laid for us to feel good about ourselves? The stage is set for important divine marching orders!”  In 1997 during an interview with Billy Graham, Schuller said “everybody…whether they come from the Muslim world, or the Buddhist world or the Christian word, or non-believing world, are members of the body of Christ…and they’re going to be with us in heaven.”

Schuller pushed a false feel good doctrine because, as he wrote in his book Self-Esteem, theology often failed to interpret repentance as a positive creative force therefore, “if Christianity is to succeed in the next millennium, it must cease to be a negative religion and must become positive.”  In other words, everything God demands of us is nonsense and the sacrifice Christ made for us was useless.

Jim Wallis of Sojourners, a registered Democrat, and former spiritual adviser to Obama, is an adroit political operative, publicly portraying himself as a politically neutral religious figure whose overriding allegiance is to God. Always with the disclaimer that neither political party can claim to authoritatively represent the values of religious faith, Jim Wallis contends that Republican policies tend to be immoral and godless.

In the ’70s Wallis championed Communism. In the ’80s he championed the El Salvadoran terrorist group (FMLN) and invited them to join with him in acts of civil disobedience. In 2005 Wallis said that private charity to help the poor was insufficient and that true social justice could only be achieved by an omnipotent central government empowered to redistribute wealth.  In a 2006 radio interview with Interfaith Voices, Wallis reemphasized his redistribution agenda, without any hesitation. “That’s what the gospel is all about.”

Of course God cares about injustice and oppression but there isn’t one verse in the Bible that says government should tax the prosperous so that money can be given to the poor. There is nothing in the bible to support the transfer of wealth through confiscatory taxing and redistribution policies touted by the left. As a matter of fact, God’s word does not support the idea of a welfare state. 2 Thessalonians 3:10-13 specifically says that if man (one able to work) does not work, he should not eat. Biblical justice, unlike social justice, means equality before the law.