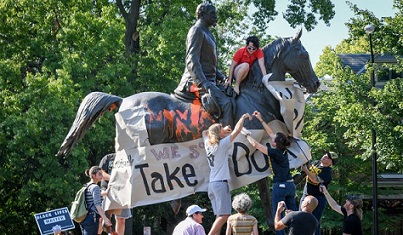 “Not to know what happened before you were born is to remain forever a child.” Cicero

Today’s students are know-nothings. Their minds are largely empty, devoid of any substantial knowledge that should be the fruits of their education. They are the culmination of western civilization that has forgotten it origins and aims, and as a result, have achieved near-perfect indifference about itself.  They respect diversity, without having the slightest idea what diversity is and are experts in the arts of non-judgmentalism and tolerance, at least for those who believe as they do. They believe themselves to be the masters of the universe, a generation-in-waiting who will run America and the world.

But ask them some basic questions about the civilization they will be inheriting.  Who fought in the Peloponnesian war? What was at stake at the Battle of Salamis? Who taught Plato and whom did Plato teach? What happened to the Roman Empire? Why does the Magna Carta matter? What are the Federalist Papers? Who wrote the Declaration of Independence? What happened at Yorktown in 1781? Why was the War Between the States fought? Who won? What did Lincoln say in his Second Inaugural? Raise your hands if you have read both the Iliad and the Odyssey? The Canterbury Tales? Paradise Lost? The Inferno?

Unfortunately this pathetic ignorance among high school and university students is no accident. While we have fallen into the bad habit of thinking our educational system is broken, make no bones about it, it is working on all cylinders – with an aim to produce cultural amnesia, a wholesale lack of curiosity, history-less free agents, and educational goals composed of content-less processes and unexamined buzz-words like “critical thinking,” “diversity,” “ways of knowing,” “social justice,” and “cultural competence.”
Our students’ ignorance is not a failing of the educational system – it is its crowning achievement. Efforts by several generations of philosophers and reformers and public policy experts whom our students (and most of us) know nothing about have combined to produce a generation of know-nothings.

The overarching lesson that students are taught is to understand themselves within the concept of a comprehensive global system with a common commitment to mutual indifference. Any remnant of a common culture would just interfere with this prime directive. A common culture implies that we share something thicker, an inheritance that we did not create, and a set of commitments that imply limits and particular devotions.

Ancient philosophy and practice heaped praise upon res publica – a devotion to public things, things we share together. We have instead created the world’s first res idiotica – from the Greek word idiotes, meaning “private individual.” Our education system excels at producing solipsistic, self-contained selves whose only public commitment is an absence of commitment to a public, a common culture, a shared history. They are perfectly hollowed vessels, receptive and obedient, without any real obligations or devotions. They have been taught to care passionately about their indifference, and to denounce the presence of actual diversity that threatens the security of their cocoon. They are living in a perpetual Truman Show, a world constructed yesterday that is nothing more than a set for their solipsism, without any history or trajectory.

In such a world possessing a culture, a history, an inheritance, a commitment to a place and people is a hindrance and handicap. Without a basic knowledge of our own civilization, our own culture, we will remain forever children, always would-be victims of every demagogue or tin pot dictator that our time vomits up.

I weep for them, for what is rightfully theirs but hasn’t been given. I can’t help but hold the hopeful thought that the world they have inherited – a world without inheritance, without past, future, or deepest cares – is about to come tumbling down, and that this collapse would be the true beginning of a real education.

The end of history signals the End of History for the West.