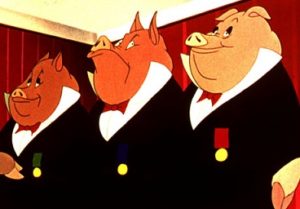 Like gods walking the earth, the Marxist Priests of Power, in their perverted minds, believe they can create human nature.

Marxism, the core ideology of modern Socialism, is an irrational, utopian and coercive perversion of human equality. Marxism seeks equality where equality does not exist, demanding legal enforcement of equal social outcomes, including those related to economics, higher education, athletics, religion, and human sexuality. The same ideology extends to international relationships whereby no nation is allowed to excessively prosper or achieve greatness, i.e. all nations must be equal.

“The party seeks power entirely for its own sake…The object of power is power…Always there will be the intoxication of power…We are the Priests of Power…We’ll cut the links between child and parent…and between man and woman…You are imagining that there is something called human nature which will be outraged by what we do, and will turn against us; but we create human nature.” George Orwell, 1984

Under the guiding hand of intellectuals, the so-called enlightened elite, and the lap-dog media, Marxist ideas are slowly and silently transforming the mental attitudes of Americans.   For example, we fail to recognize Marxist equality at work when elementary schools do not keep score during athletic events as not to make anyone feel less athletic than the other. Collegiate Title IX rules are also a form of Cultural Marxism since in the name of gender equality, equal numbers of men’s and women’s athletic programs are unnaturally enforced crushing equal rights on the altar of equal outcome.   Affirmative Action is another form of Cultural Marxism since these laws unnaturally force equal ethnic or racial outcomes in graduate school admission instead of a natural enforcement of equal academic standards for all.

Under Cultural Marxism the values of American Judeo-Christian Culture must be seen as equal to that of Totalitarian Political Islam. By unnaturally slicing open the Gordian Knot of human nature, the value of homosexuality must be made equal, by force, to that of heterosexual marriage.

Economic Marxism occurs when government seeks to force equal property outcome among people, through despotic inroads on the rights of property through social justice. As Karl Marx wrote, Marxist intend to make everyone equal by using the lazy, non-disabled government dependents [useful idiots] to wrest power, by degree, from the tax-paying middle class and business entrepreneurs to centralize all instruments of production into the hands of a tyrannical Marxist government ruled by the wealthy elite. As Lenin so aptly observed, “the way to crush the bourgeoisie is to grind them between the millstones of taxation and inflation.”

Marxism, as a prerequisite to irrational government enforced equal outcome always demands rules and laws which restrict freedom. Equality of economic outcome under Marxism always entails the use of excessive government force and is thus incompatible with human liberty. Bear in mind that an unnatural use of force requires a superior class of not-to-be-equalized Marxist equalizers, a class superior in rights, before law, in social and economic outcome, who end up with the lion’s share of everything.

George Orwell observed that Marxists are metaphorically the Pigs of Animal Farm, individuals who consider themselves “more equal than others.” The Marxist Pigs are enthralled with the idea of government owning the fruit of the laboring “little animals” where all their eggs, apples, corn, etc. is collected, their property collectivized. The fruit of the lesser animals’ labor is placed into a communal pot under exclusive control of the Marxist Pigs who are in charge, and after gorging themselves with a lion’s share of communal food, require all the equalized little animals to approach their communal pot, tails wagging, in order to receive leftover rations. The little animals must lick the hand that feeds them. Since the Pigs control all property in the communal pot they are in a position to steal property from those that labor to share with the lazy and unproductive little animals, in return for votes.

As with the Pigs of Animal Farm, Marxism sets up an elite ruling class of self-serving, social-engineering “Philosopher Kings,” an unjust, tyranny-tilted governing system of unequal rights, whose features, along with Monarchy, Oligarchy or Fascism our Founding Fathers warned against.

“To take from one because it is thought that his own industry and that of his father’s has acquired too much, in order to spare to others, whose, or whose fathers have not exercised equal industry and skill, is to violate arbitrarily the first principle of association, the guarantee to every one of a free exercise of his industry and the fruits acquired by it.” Thomas Jefferson

An unnatural state of serfdom and poverty occurs when Marxist government forcefully robs and then “collectivizes” the fruit of other people’s labor, in violation of Natural Law. Serfdom and poverty are inevitable in a Marxist society because the people comprising collectivist government, and their proletarian allies, invariable become greedy for the fruit of other men’s labors. It follows that the work ethic of the laboring middle class is ultimately destroyed as they become exhausted and demoralized by the burden of excessive taxation on their labor on behalf of the parasitic class in alliance with the parasitic Marxist ruling class.

At the end of the Marxist economic class struggle, when the middle class finally succumbs, there will be a dramatic fall in production of food, goods and services.   Crisis and possible anarchy inevitably ensures as Social Justice ends in poverty for everyone. Marxist Socialism is not the cure for injustice and poverty – it is one of the chief causes of injustice and poverty – an organized crime against humanity.

“By bringing the whole of life under the control of the State, Socialism necessarily gives power to an inner ring of bureaucrats, who in almost every case will be men who want power for its own sake and will stick at nothing in order to retain it…It cannot be said too often, at any rate, it is not being said nearly often enough, that collectivism is not inherently democratic, but, on the contrary, gives to a tyrannical minority such powers as the Spanish Inquisitors never dreamed of.” George Orwell

← The Insidious Semantics of “Gun Control”
Can We Prevent a Second Civil War? →