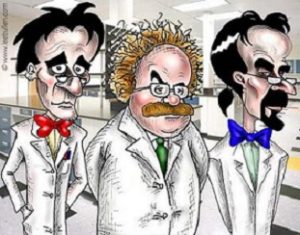 According to Otto’s article, America is slipping off its science foundation fostered by the political right.  “…Science denialism among Democrats tends to be motivated by unsupported suspicions of hidden dangers to health and the environment… while Republican science denialism tends to be motivated by anti-regulatory fervor and fundamentalist concerns over control of the reproductive cycle.  Of these two forms of science denialism, the Republican version is more dangerous because the party has taken to attacking the validity of science itself as a basis for public policy when science disagrees with its ideology.”

Mr. Otto then goes into a tirade explaining that by falsely equating knowledge with opinion, postmodernists and anti-science conservatives collapse our thinking back to a pre-Enlightenment era, leaving no common basis for public policy.  Public discourse is reduced to endless warring opinions,  thereby assuring that policy is determined by the loudest voices which reduces us to a world in which might makes right.

First Mr. Otto – America is not a democracy – It is a Republic.   And yes, there is a difference.

As to skepticism over skepticism over Darwin’s Theory of Evolution you must remember that a theory is not science – basically it is an accepted best guess without scientific proof.  For Darwin’s “theory” to be a valid science, evolution would have to be an ongoing process.  It was probably a lot easier for scientists to accept Darwin’s guess before the fossil record was much less complete and before spontaneous generation of life was disproved and before scientists understood genetics and molecular biology as well as they do today.

Evolutionists told us that our brain size gave us the fitness edge to evolve from apes.  Now Jeron B. Smaers and 4 colleagues in “UCL Anthropology & UCL Genetics, Evolution & Environment” are even calling this into question. They report that changes in body size often occur independently of changes in brain size and visa versa and it’s incorrect to assume that natural selection is trying to increase neuronal capacity when brain size increases relative to body size.

Scientists are certain that “one day” they will discover an explanation for the theoretical impossibility of spontaneous generation without which they can not account for life on earth.  They are just as certain that someday they can explain the lack of fossil evidence to support their hypothesis of macro-evolution, or why animals are little more than the sum of their atoms and neurons that compose their cerebral hardware, whereas humans possess imagination, conscience and nobility of spirit.   That “some day” and “one day” have yet to  materialized.  And each passing year, each new scientific discovery proves it will never happen.

Not all scientists agree that evolution is real.  Many of the world’s greatest scientists do not accept  it as fact.  Science Digest reported that “Scientists who utterly reject evolution may be one of our fastest growing minorities. . .many hold impressive credentials in science.”

Dr. Arthur E. Wilder-Smith, a former evolutionists has debated leading scientists throughout the world.  In his opinion – evolution did not fit as well with established facts of science as did the creation model of Intelligent design.  Dr. Richard Milton said that “Darwinism has never had much appeal for scientists outside of the English speaking world and has never appealed much to the American public.

Evolution’s grip has weakened in successive areas such as geology, paleontology, embryology and comparative anatomy.  Now even geneticists are beginning to have doubts.  It is only in mainstream molecular biology and zoology that Darwinism retains serious enthusiastic supporters.”

Man made  global warming, aka climate change, has been proven numerous times to be a hoax.  Regulation for the sake of a socialist agenda to redistribute wealth is enough to prove that it is nothing more than a scam.  Why do you think they changed conveniently from global warming to climate change?  Nothing they predicted has come to pass –  Climate change is much easier to prove.    When I was growing up we had climate change all the time – back then it was called weather.

As to his pro-abortion assertion that the GOP adopted a no abortion platform at the 2012 convention – that is also false.  The GOP platform agreed on abortion in the case of rape or incest.   And, just because the majority of  Americans can agree that life begins at conception and that to murder an innocent unborn child as a means of birth control is wrong – does not make us right-wing scientific deniers.   Once again left-wing biases are getting in the way of facts.

Some of the world’s most prominent scientists and physicians testified at a 2010 U.S. Senate committee hearing that human life begins at conception.  Dr. Jerome Lejeune, professor of genetics at the University of Descartes in Paris testified that “after fertilization has taken place a new human being has come into being.”  Professor Hymie Gordon of the Mayo Clinic said that “By all the criteria of modern molecular biology, life is present from the moment of conception.”  Professor Micheline Matthews-Roth of Harvard Medical School testified that it is “scientifically correct to say that an individual life begins at conception. . .” Ashley Montague, geneticists and professor at Harvard stated that “Life begins not at birth, but at conception.”

What the writer seems to forget is that scientists are not a separate class of superior human beings with superpowers.  People hold biases toward their own viewpoints and  Scientists, much like the rest of the “mortal  peasants,” are subject to self-deception, pride and self-interest.  Science is not infallible.

John Adams wrote that “Facts are stubborn things; and whatever may be our wishes, our inclinations, or the dictates of our passion, they cannot alter the state of facts and evidence.”

You cannot explain the universe without God.  Life was not created by natural phenomenon.  Abortion for convenience is murder.  The climate changes daily, hourly in some cases – its called weather.

“It might also be pointed out that scientists are not quite as objective as they say they are.  It is simply not possible for a scientist to detach himself completely from the theories and hypotheses which he espouses. . .There is a great deal of subjectivity in science. . .”  John Klotz, Ph.D., Biologist, Geneticist in “Assumptions in Science and Paleontology.”

← Is civil argument possible with a gun-grabber?
Romney Shows His True Colors →