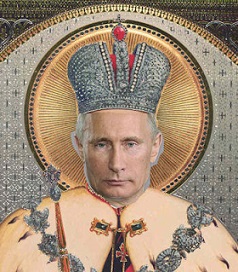 After the Soviet Union’s collapse in 1991, democracy was thought to be irresistible. Instead, barely a quarter-century passed before democracy and freedom were once again enmeshed in the struggle against tyranny. In March of this year, Vladimir Putin was re-elected to his 4th 6 year term as Russia’s president amid the reports of ballot box stuffing and forced voting.

Putin, a career apparatchik in the Communist Party, was a 16 year loyal agent of the Soviet Secret Police, the KGB, and is now head of its successor, the FSB. As a KGB agent Putin was indoctrinated to see only Russia’s greatness in the sense of it being a great empire, in the sense that it would always come ahead of democratic institutions, individual freedom, religious freedom and human rights. In other words, for a hardline Communist and KGB agent, democratic policies are words on paper, a means to an end, nothing more.

Unfortunately, Putin’s election appears to be largely an empty legitimization ritual. Just prior to the election the Russian media cited an “unidentified” Kremlin source that said the “government” was “aiming” for 70% turnout, with 70% of the vote going to Putin.  Michael Georg Link, special coordinator and leader of the Organization for Security and Cooperation in Europe (OSCE) put the election into perspective when he stated:  “Choice without real competition, as we have seen here, is not real choice….where the legal framework restricts many fundamental freedoms and the outcome is not in doubt, elections almost lose their purpose — empowering people to choose their leaders.”

A few days after Putin won his “landslide” election,  China’s President Xi Jinping also won reelection in a unanimous vote from the country’s rubber-stamp parliament. All 2,970 members of the National People’s Congress approved his reappointment to the office he has held since 2013 and could now continue to hold indefinitely under a recent “reform” that scrapped a law limiting presidents to two consecutive five year terms. Largely seen as the nation’s most powerful leader since Mao Zedong, Xi who leads the ruling Communist Party was also named as head of the commission that commands the military.

President Erdogan, a would-be sultan, has dismantled Turkey’s constitution; jailed tens of thousands of opposition members; staged massive show trials; destroyed freedom of the press; attacked minorities; empowered religious fanatics; and invaded Syria to crush our Kurdish allies. In Egypt, where democracy came and went in a blink, President Abdel Fattah al-Sissi rules ruthlessly. With Russia’s assistance Syria’s Bashar al-Assad has survived every prediction of his fall;  the unelected Ayatollah Ali Khamenei in Iran remains that nation’s ruler and the European Union is working feverishly to cement its control over EU nations.

Even Kim Jong Un of North Korea, a tin-pot despot, has gained international recognition at a level his predecessors never achieved. In NATO and European Union members Hungary and the Czech Republic, strongmen dominate the political scene. Romania and Slovakia are struggling to maintain democratic forms, and even Poland has seen its constitution undermined.  In Italy and France, pro-Putin, neo-fascist parties have become political parties to be reckoned with.

Assisting tyranny’s resurgence is the fact that not everyone sees freedom as a top priority, preferring security over everything else. Look around you – our young people, unschooled in history, are calling for the elimination of America’s freedoms. These rebels without a clue have no concept of what they face if this nation falls.  Tyrants may oppress you but to these snowflakes they offer certainty freedom from responsibility.

We need to stop whining and be grateful for the freedoms we enjoy, for the countless privileges that this great nation provides. In perilous times such as these, when domestic demagogues cherry-pick the Constitution, when judicial tyranny abounds, when even the executive office displays impatience with our laws, we must put the Constitution above party and personal biases, above all else if we are to survive.

“Experience hath shewn, that even under the best forms of government those entrusted with power have, in time, and by slow operations, perverted it into tyranny.” Thomas Jefferson

Source: The World Is Descending Into Tyranny, New York Post; Taking The Shine Off Putin